Sili Deng, an assistant professor in the Department of Mechanical Engineering, bridges our transition to a greener future by researching cleaner and more efficient combustion tech.

Sili Deng grew up in Beijing at a time when severe air pollution frequently shut down the city. When it came time to choose an engineering focus in undergraduate school before advancing to Tsinghua University, she decided to become a thermal engineer and develop technologies that would help reduce air pollution.

Deng decided to focus on combustion technology, a passion that took her to Princeton to study under Chung K. Law, a leader in combustion research. More recently, she accepted a position as assistant professor position at MIT’s Department of Mechanical Engineering.

“I became fascinated with the complex interaction between chemistry and fluid mechanics and how that influences combustion dynamics,” says Deng, the leader of Deng Energy and Nanotechnology Group (DENG). The new group is pursuing research into the fundamentals of combustion chemistry and flow-field dynamics and exploring how technologies such as machine learning (ML) and nanotechnology can be applied to energy technology.

At Princeton and MIT, Deng became focused on the emission of soot -- nano to micro-sized black carbon particles that are created as a byproduct of incomplete combustion. One line of research at DENG is to use low temperature combustion to reduce emissions of soot and nitrogen oxides (NOx). Both are major contributors to air pollution, resulting in severe health and environmental problems.

Soot, which is a particular problem with diesel engines, is only partially mitigated by catalytic converters and can reduce their effectiveness. NOx is the precursor for acid rains and an indirect greenhouse gas in that it can generate the tropospheric greenhouse gas ozone via photochemical reactions.

When we asked why combustion research merits funding when the industry is rapidly turning to cleaner electric vehicle technologies, Deng argued that despite the threat of climate change, the internal combustion engine will not disappear overnight. “It will take time to build infrastructure for renewables, which have their own carbon footprint.”

It is also true there are many remote locations and heavy-duty vehicle classes where battery power will take longer to penetrate. And combustion technology extends beyond cars to other sectors that will take longer to transition to clean energy such as the gas turbines used on aircraft and natural gas power plants. Meanwhile, some 4.2 million people die from air pollution every year.

“About 85 percent of global energy comes from combustion of fossil fuels and synthetic fuels, which is a very efficient way to turn chemical energy into thermal energy,” says Deng. “There will be a transition period when we will design cleaner fuels for combustion and improve combustion efficiency to reduce emissions. Even if you can make only a 0.1 percent change in the energy landscape you can make a huge impact on society.”

There will be a transition period when we will design cleaner fuels for combustion and improve combustion efficiency to reduce emissions. Even if you can make only a 0.1 percent change in the energy landscape you can make a huge impact on society.

Combustion technology can also play a role in cleaner energy technologies. At Princeton, Deng realized that the process that forms soot can be utilized to synthesize other materials. “The fundamental knowledge developed in combustion research can be utilized to advance the development of other energy conversion and storage technologies. With the help of nanotechnology, combustion can also be utilized as a high-throughput low-cost process to produce materials to energy conversion and storage.”

One of Deng’s research efforts borrows from combustion to create a form of flame synthesis that can more affordably create cathodes for lithium ion batteries, as well as solid-state electrolytes for batteries. Another project applies nanotechnology to extend the applications for combustion of carbon-neutral aluminum.

“We are bringing ideas from other fields into combustion research, including nanotech and ML,” says Deng. “With ML, we can automatically develop the chemical models to describe chemical reactions. Our toolbox can also be used to understand biochemistry for biofuel production.”

Soot is created during an incomplete combustion process. It usually starts with a gas-phase reaction that forms PAH -- poly-aromatic hydrocarbons -- such as benzene and naphthalene. The molecules collide and react with other gaseous species and condense on each other to form chemical bonds that form dimers. Later they become particles that consist mainly of carbon with a little hydrogen.

Low temperature combustion technologies can reduce soot by increasing the mix of fuel and oxidizer. “There is a tradeoff between the efficiency of energy conversion and emissions in combustion,” says Deng. “For efficiency, we want high temperature and pressure to turn the energy stored in the chemical bonds to thermal energy. But when the temperature is high and there is not enough mixing of the fuel and oxidizer, it produces soot and NOx.”

Although combustion efficiency can reach 90 to 95 percent, the thermal efficiency for internal combustion engines is quite low. Gasoline engines have around 30 percent efficiency and diesel engines, which can achieve a higher pressure and compression ratio, top out at about 40 percent. About a third of the energy is wasted through the tailpipe. 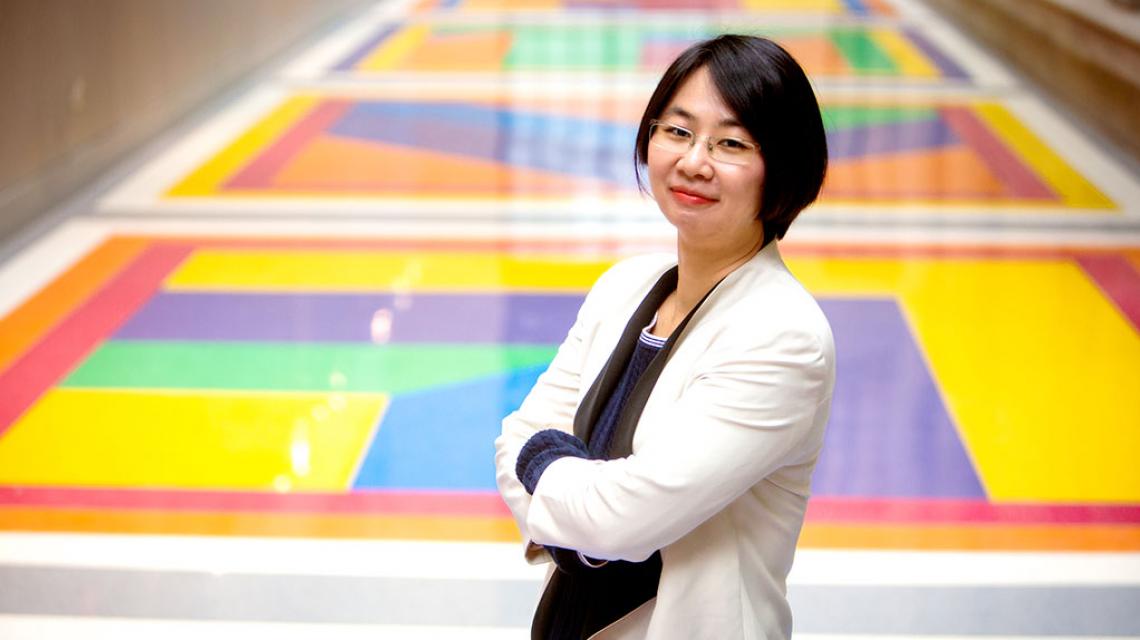 During her research into soot creation, Deng realized the process was much like the flame synthesis process used to create carbon black to improve the durability of tires. Other flame synthesis applications include titanium oxide for white pigment, paint, and catalysts, as well as silicon oxide, which is used as a flow aid. With flame synthesis, precursors can be introduced as a solid, a gas, or in the case of flame spray pyrolysis, liquid.

Deng’s idea was to create a new form of gas-fueled flame synthesis by recreating the conditions that result in incomplete combustion and soot. “We decided to change the precursor that goes into the reactor to synthesize a useful material,” says Deng. “We do this by tailoring the chemical soup and temperature and controlling the residence time and rate to control the morphology and composition.”

We decided to change the precursor that goes into the reactor to synthesize a useful material. We do this by tailoring the chemical soup and temperature and controlling the residence time and rate to control the morphology and composition.

With flame synthesis, “you introduce these precursors into an environment that consists of a chemical soup of oxygen and radicals to accelerate the reaction,” explains Deng. “By applying and controlling the flame, you can synthesize primary particles that go through collisions that result in different morphologies. You can either collect the loose particles or do post-processing to create film or foam.”

Deng is attempting to use similar methods to synthesize materials for harvesting renewable energy and energy storage. Flame synthesis offers the benefit of high throughput and scalability, especially when introducing the precursors as gases.

“Compared to wet chemistry synthesis methods where chemistry happens in the liquid phase, gas-phase synthesis would be orders of magnitude faster, enabling a very high production rate,” says Deng. Production is further accelerated since it is a “continuous process rather than batch-based wet chemistry.”

Yet, if the process is too fast, “the window you have to fine-tune the morphology and chemistry is too short and is more difficult to control,” says Deng. “There is a tradeoff between the production rate and controllability.”

After proving her flame synthesis techniques in the lab, Deng started looking for applications that permit “relatively good control of the morphology and composition of the material and maximized throughput of the synthesis process.” Because combustion is a strong oxidation environment, Deng sought out oxide targets, “especially metal oxides with a high temperature tolerance.”

One such application in high demand is the synthesis of metal-oxide for cathodes used in lithium batteries. These cathode materials are typically synthesized using coprecipitation methods, “which involve a lot of wet chemistry,” says Deng. “Cathodes represent about 40 percent of the cost of a lithium battery -- about half from raw materials and half from manufacturing. Because flame synthesis is much faster and more scalable, we can bring down the manufacturing cost and scale up to tons per hour.”

Other targets with metal oxides could also benefit from the flame synthesis method. “Metal oxides have a lot of applications, including supercapacitors and solid-state electrolytes for energy storage,” says Deng.

In another line of research involving combustion, Deng is looking into carbon neutral solid fuels for combustion. Today, many rockets are propelled using solid fuels such as aluminum, a metal that is relatively cheap and abundant. “We decided to bring more additives and components into aluminum to enhance energetic behavior and make it useful for civic applications,” says Deng.

The major challenge with aluminum combustion is that is difficult to ignite. “We also need to worry about how efficiently we can burn aluminum and how long it can burn,” says Deng. “We are trying to engineer the interface between aluminum and oxidizers to make it easier to ignite and provide more efficient combustion.”

One research direction is to use nano-sized aluminum particles to increase the surface area with which oxidizers can interact. “At the nano size, the surface-to-volume ratio becomes larger,” explains Deng. “For nano-sized aluminum, the native oxide layer on the surface will be quite large, which reduces the active component of aluminum that can be used for combustion. There is a tradeoff in making aluminum easier to ignite and combust while maintaining the active content.”

Deng is also looking into an alternative approach that uses bulk aluminum. “In this case, we are trying to make the surface more reactive with oxidizers.”

Deng cautions that an aluminum-burning car may be a long way off. “If your car was burning aluminum, you would be riding on a rocket engine, which would be very challenging to control,” says Deng. “There is also the question of how to collect the products after combustion, which is not much of an issue with rockets.”

Instead of directly burning aluminum, Deng envisions using the technology “to react with water to generate hydrogen gas, which would then be used as fuel. With hydrogen, the only byproduct is water, which is easy to collect.”

Although the aluminum research is a long-term project, the flame synthesis technology for creating cathodes should soon reach the point where a startup makes sense. “MIT is a great incubator for technology,” says Deng. 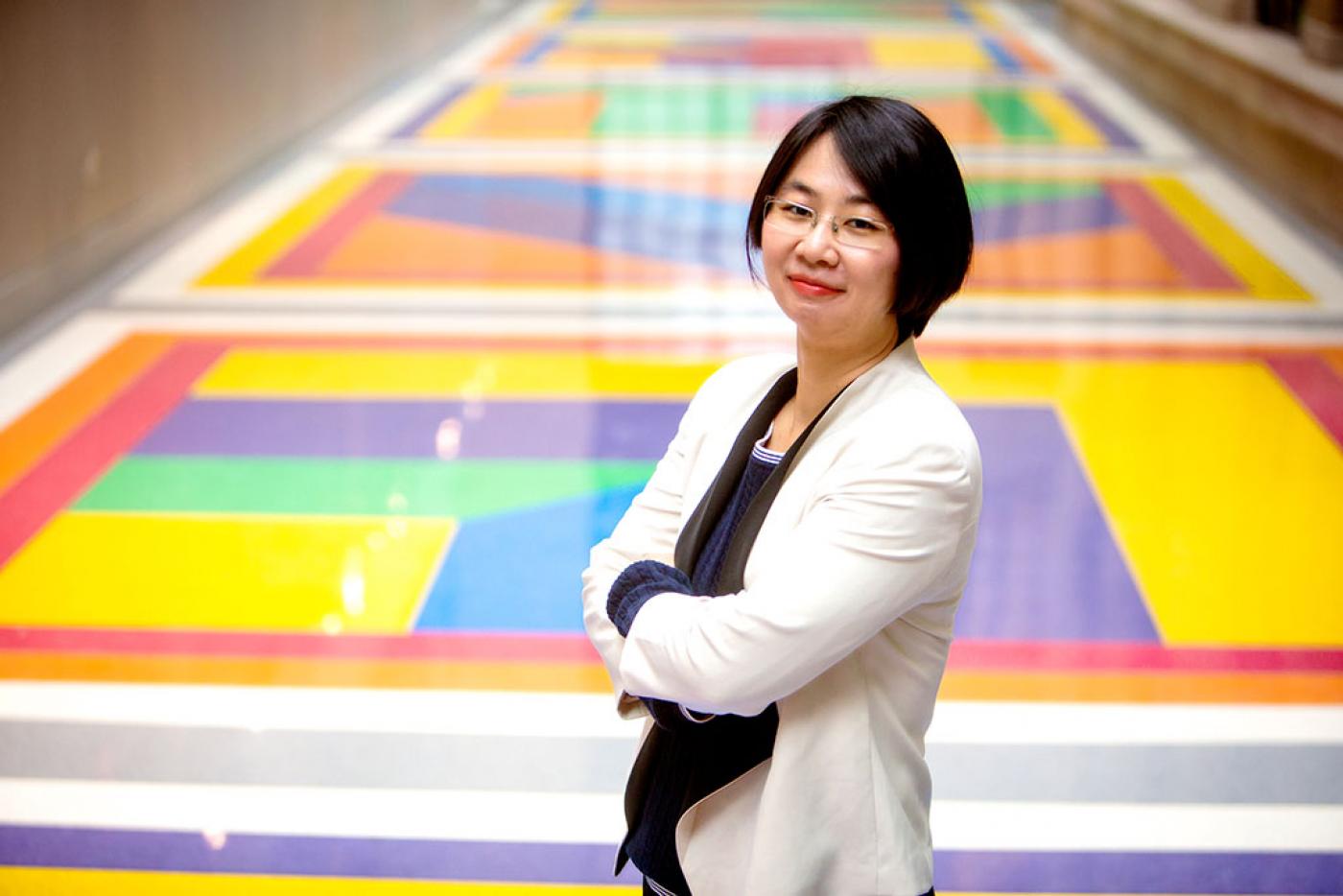