Innovating in the sky

Innovating in the sky
aviation

R. John Hansman directs the MIT International Center for Air Transportation and is a professor of aeronautics and astronautics. He’s solving the toughest challenges facing the aviation industry.

“People in the industry thought something like this was completely out of the box, if not impossible, in terms of feasibility,” John Hansman recalls. It was 2013, and Hansman, who is the T. Wilson Professor of Aeronautics and Astronautics at MIT, had recently agreed to a project that would see his aircraft design capstone class build an unmanned aerial vehicle (UAV) for the US Air Force. More specifically, the Air Force wanted to know if Hansman’s students were capable of designing a micro-UAV that could fly for an hour after being shot out of an anti-missile flare canister at 300 G's.

“They actually wanted a swarm of micro-UAVs to do surveillance and sampling of the atmosphere," Hansman recalls. "It was a tough challenge in terms of design requirements." The canister from which the micro-drones would be shot measured two inches by two inches by seven inches. Hansman's students rose to the occasion, innovating an aerodynamic, unfolding prototype they named Locust ((low-cost UAV sky telemetry system). Today, the technology forms the basis for the swarm of micro-drones the Department of Defense (DoD) calls Perdix.

It's just one of many successful collaborations that Hansman has overseen between MIT students, MIT Lincoln Laboratory, and industry partners. More recent projects include a UAV that is 3D-printed from titanium and flies at Mach 0.8 (460 mph), and a super-short field take-off and landing prototype designed for Boeing. This year, they're designing a solar, stratospheric, environmental monitoring vehicle in collaboration with Harvard University. It’s designed to sit in the stratosphere for several months and track deep convective storms over the central US. The goal is to be able to examine specific environmental impacts of global warming.

Rather than telling the students it’s too hard, we just let them rip with new technologies and ideas. MIT students and faculty are not afraid to get hands-on, and we’ve been very successful at tackling tough problems in the real world—at minimal financial risk for industry partners.

"These are interesting cases where students are given a high-risk problem that's harder than even industry thinks can be done. Rather than telling the students it’s too hard, we just let them rip with new technologies and ideas,” says Hansman. “MIT students and faculty are not afraid to get hands-on, and we’ve been very successful at tackling tough problems in the real world—at minimal financial risk for industry partners.”

Hansman holds a PhD from the Institute in Physics, Meteorology, Aeronautics & Astronautics, and Electrical Engineering. As a graduate student, he spent his summers logging airtime as a pilot around the northeast US. Eventually, he would combine his love of flying with a deep interest in the things that drive air transportation. Today, he chairs the US Federal Aviation Administration Research Engineering & Development Advisory Committee as well as other national and international advisory committees.

He's also the Director of the MIT International Center for Air Transportation (ICAT). ICAT is a laboratory within the Department of Aeronautics and Astronautics that works jointly with MIT Sloan and is broadly focused on all things related to air transportation—everything from aviation safety to airline management. It even runs a global airline industry program with involvement from airlines, airports, and the FAA, all working with MIT to move industry forward while improving the safety and operational efficiency of air transportation.

ICAT’s stated mission is to undertake research and educational programs that discover and disseminate the knowledge and tools underlying a global air transportation industry driven by new technologies. According to Hansman, one of the greatest technological opportunities he sees in air transportation these days is the use of data analytics.

Every airplane has a flight data recorder (FDR), every commercial airplane is being tracked by radar systems, and weather and the environment are significant influencing factors on every flight. “We have huge datasets available to us in the aviation industry, and we think it’s possible to take advantage of those datasets to find opportunities to improve efficiency, safety, and even the environmental impact of air transportation,” says Hansman. 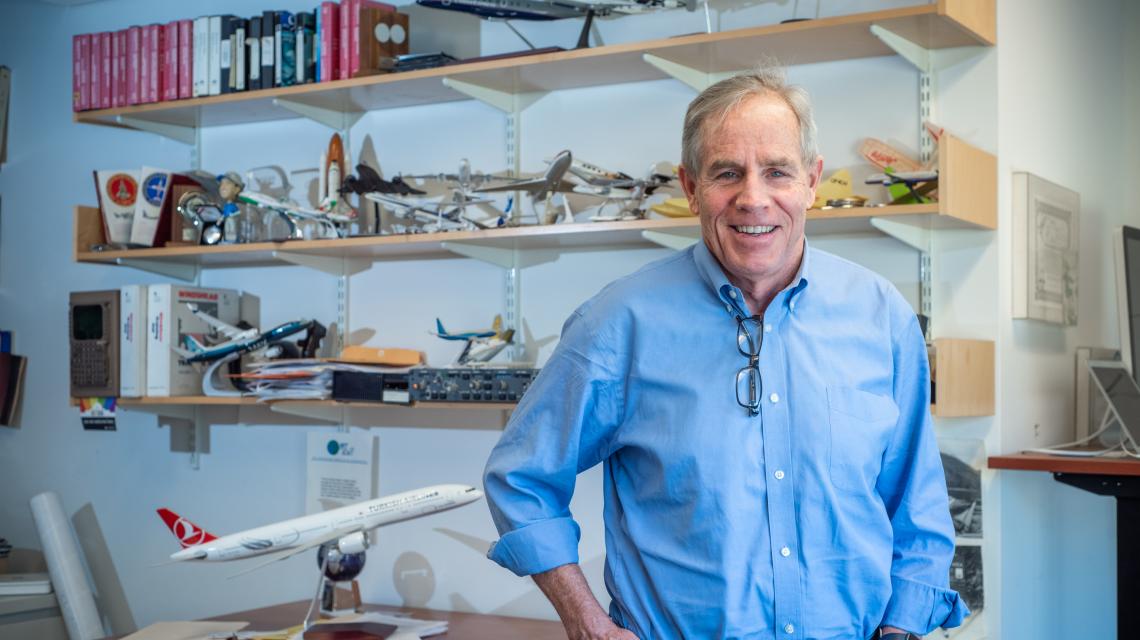 Hansman and his ICAT students are currently engaged in a variety of projects that use the latest data mining techniques to find dynamic solutions for difficult industry challenges. In addition to using FDRs to seek out the precursors of aviation risk, combing through data to identify anomalous, or unusual, flights, they’re using meteorological data coupled with aircraft performance models to develop decision support tools (either a laptop or an electronic flight bag) so pilots and airline dispatchers can have better intuitive insight into the best times to climb or descend in altitude, thereby maximizing fuel burn and improving overall operational efficiency.

Hansman points out that runway overruns are the number three cause of fatal accidents in commercial air transport. “If there’s snow on the runway, the pilots don't have a good indication of whether they're going to be able to stop on the runway. Their best information is what the pilot who landed in front of them tells them about the braking action," he says. To give better guidance to pilots, Hansman and his ICAT students are examining weather data, data from FDR systems, pilot reports, and snow-plowing histories to better identify when poor braking has occurred and when it might occur in the future.

On the environmental side, ICAT, along with the MIT Laboratory for Aviation and the Environment, plays a leading role in a cooperative aviation research center led jointly by MIT and Washington State University called the Aviation Sustainability Center (ASCENT). Also known as the Center of Excellence for Alternative Jet Fuels and Environment, ASCENT is funded by the FAA, NASA, the DoD, Transport Canada, and the Environmental Protection Agency. ASCENT works to create science-based solutions for the aviation industry’s biggest challenges.

Hansman’s team supported the FAA in the technical analysis that would lead to the first-ever global carbon emissions standards for commercial aircraft.

Under the auspices of the ASCENT banner, Hansman and ICAT are actively working with the FAA to mitigate the environmental impacts of air transportation. This involves everything from exploring alternative fuels and developing design standards of future aircraft in terms of fuel efficiency to reducing aircraft noise. In 2016, Hansman’s team supported the FAA in the technical analysis that would lead to the first-ever global carbon emissions standards for commercial aircraft. Set by the United Nations International Civil Aviation Organization and agreed on by 23 countries including the US, the standards are expected to reduce carbon emissions by more than 650 million tons between 2020 and 2040.

But it's a tough challenge. Innovating in a space that is safety-critical means that mistakes can lead to the loss of human life. Furthermore, Hansman notes the inherent tension of designing something new for the future while improving what you already have at your disposal. Because the fact is that the aviation industry remains very much tied to fossil fuels for the time being. “I can design a new airplane that’s incredibly fuel efficient, but I’m still going to be flying the airplanes I have today for 30 years,” says Hansman. “We think there’s a lot of potential in figuring out how to make the operation of the airplanes and the infrastructure we have today more efficient.” 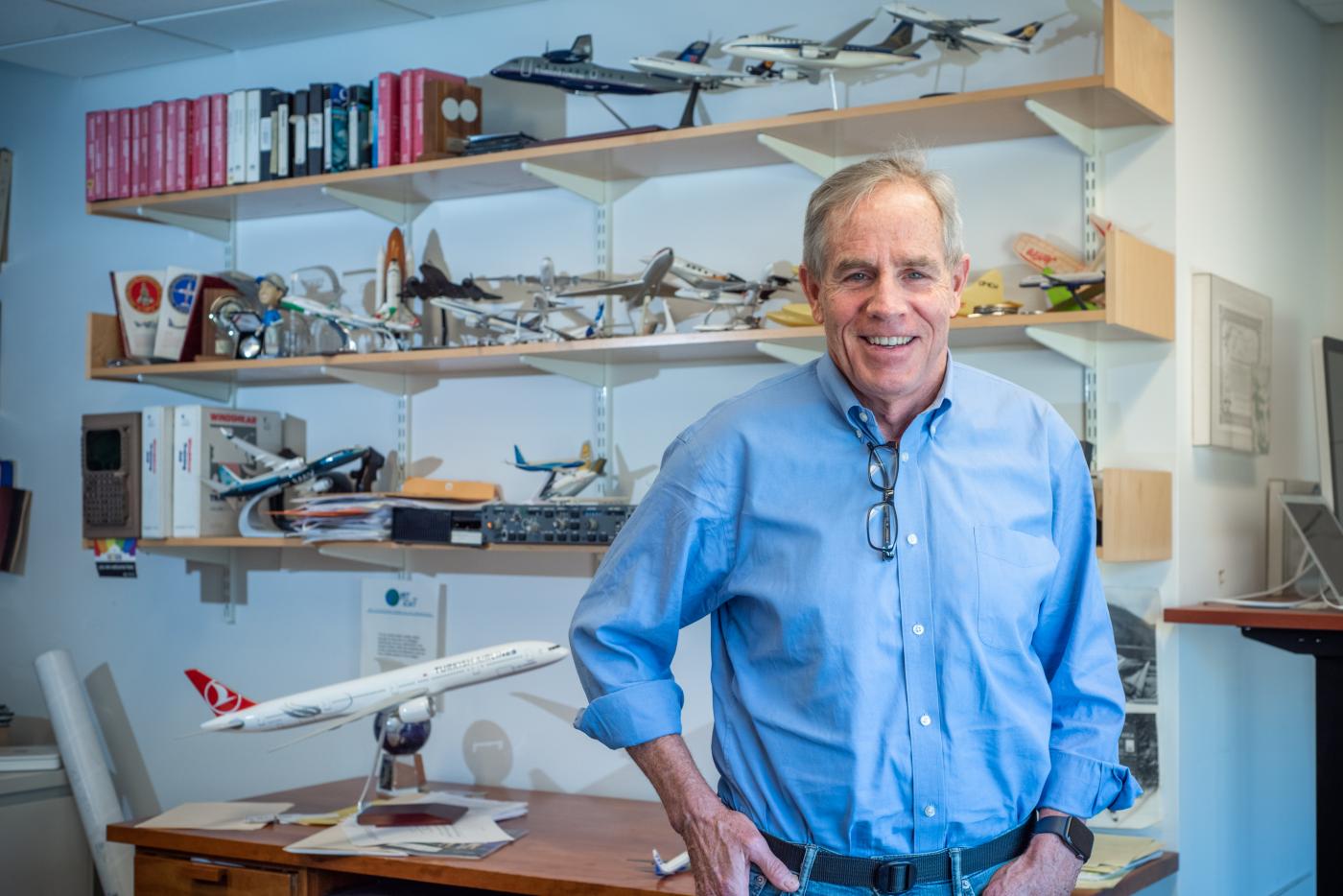