Giuseppe Romano is a research scientist at the MIT Institute for Soldier Nanotechnologies. His research focuses on computation-driven materials discovery with applications for renewable energy.

Interest in thermoelectricity has waxed and waned over the years. But advances in nanoscience combined with the growing threat of energy insecurity as it relates to the future of our planet has played a significant role in reinvigorating the field. Today, research scientists like Giuseppe Romano explore the outer reaches of energy-related materials science using multiscale models and simulations. The goal: to design the next generation of nanostructured materials and devices capable of harnessing thermoelectricity for game-changing energy applications.

NASA has been using thermoelectricity to power space missions since the 1960s. Space probes like Voyager 1 and Voyager 2 use radioisotope thermoelectric generators (RTGs) that convert heat released from the decay of a radioactive material (plutonium-238) into electricity. It’s been extremely reliable for NASA, but in recent years, they’ve been working to develop the next generation of RTGs that require smaller amounts of radioactive materials.

In 2018, Romano spent time at NASA's Jet Propulsion Laboratory (JPL), modeling materials to help accomplish their goal. "It was fascinating to visit JPL and witness the real-world application of what I had been working on with simulations,” he says. Today, JPL helps fund Romano’s groundbreaking research at MIT.

We’ve had to hack nature and create semiconducting nanostructures that combine the properties we need in terms of electrical and thermal conductivity.

However, outside of niche applications, issues related to inefficiency, cost, and the unreliability of available materials have stunted widespread adoption of thermoelectrics. An efficient thermoelectric material is good at conducting electricity but is a poor heat conductor. Unfortunately, those two properties usually go hand in hand; materials with high electrical conductivity tend to have high thermal conductivity.

But engineered nanomaterials, with their unique physical and chemical properties, have provided new avenues of exploration in thermoelectrics. “Nature wasn’t generous in providing us with highly-efficient thermoelectric materials,” says Romano. “We’ve had to hack nature and create semiconducting nanostructures that combine the properties we need in terms of electrical and thermal conductivity.”

Which is where Romano’s work in modeling and simulation comes into play. Because if you’re going to design novel materials, you want to be able to understand and predict how they will behave. Simulation methods operate on levels from the atomistic to the continuous. It’s the difference between viewing the ocean as a series of water molecules interacting with each other as opposed to seeing the body of water as a whole. Atomistic scale models are useful for capturing the most intimate effects of a material, whereas continuous models work well for exploring the average effect of a particular phenomenon on the larger system. 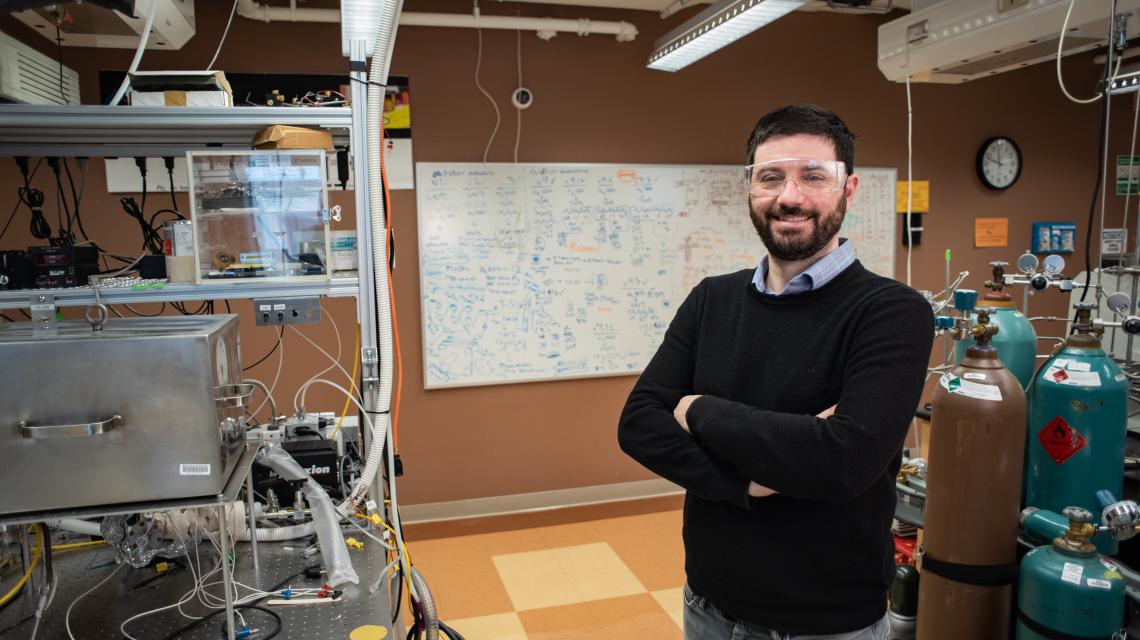 There are entire scientific communities devoted to each of these perspectives and research departments built around the different ways of examining the physical world. Romano, however, works at the intersection of these two extremes. His multiscale models use mathematics and computation to quantitatively represent and simulate a system at more than one scale. “I’m interested in what happens between the atomistic and the continuous. I like multiscale modeling because it’s a link between these worlds, where I can come up with novel physical models to bridge not only the two descriptions but the two communities.”

At the heart of Romano’s work sits an impediment called Fourier’s law, also known as the law of heat conduction. It describes the relationship between heat flow and temperature gradient at the macroscale. But if you shrink down to the nanoscale, thermal transport deviates from the standard diffusive behavior, leading to a failure of Fourier’s Law.

Modeling heat transport in such a regime is challenging because of the complicated interaction of heat carriers called phonons. But Romano has found a workaround. “Over the past decade, I’ve been deeply invested in developing what I call OpenBTE,” he says. “It’s a tool that can capture non-diffusive behavior of heat transfer in an efficient way." Basically, it's open-source software for simulating nanoscale thermal transport in nanostructured materials, and it has the potential to significantly impact the field of thermoelectrics.

By using thermoelectric materials, we could harness some of the heat wasted in power plants and industrial processes and put it back into the system in the form of electricity.

Imagine improving the efficiency of energy utilization while decreasing carbon emissions by converting even a fraction of waste heat to electricity using thermoelectrics. Today, about 70 percent of the energy produced globally is lost through waste heat. “By using thermoelectric materials, we could harness some of the heat wasted in power plants and industrial processes and put it back into the system in the form of electricity,” says Romano.

More efficient thermoelectric materials open up a range of opportunities for commercial applications. We could use body heat to power everything from consumer electronics like our smartphones to medical devices like respiratory sensors and pulse oximeters. Thermoelectric generators could even be used to harness the significant energy wasted by internal combustion engines in our cars, thereby increasing fuel efficiency and reducing C02 emissions.

To further accelerate the quest for low-thermal conductivity materials, Romano has recently started to employ machine learning models. This research, which he conducts in collaboration with MIT Professors Steven G. Johnson and Raul Radovitzky, falls under the broader umbrella of "nanomaterial design with AI," and is currently funded by (and co-executed with) the MIT-IBM Watson AI Lab. “My work at the Institute is often focused on the unknown,” he says, “whereas industry wants to commercialize materials and devices to make a product that is low-cost and viable for the masses. I believe there is a definite synergy between my work in the lab and the role of industry. Together we can facilitate innovation and bring impact to the real world.” 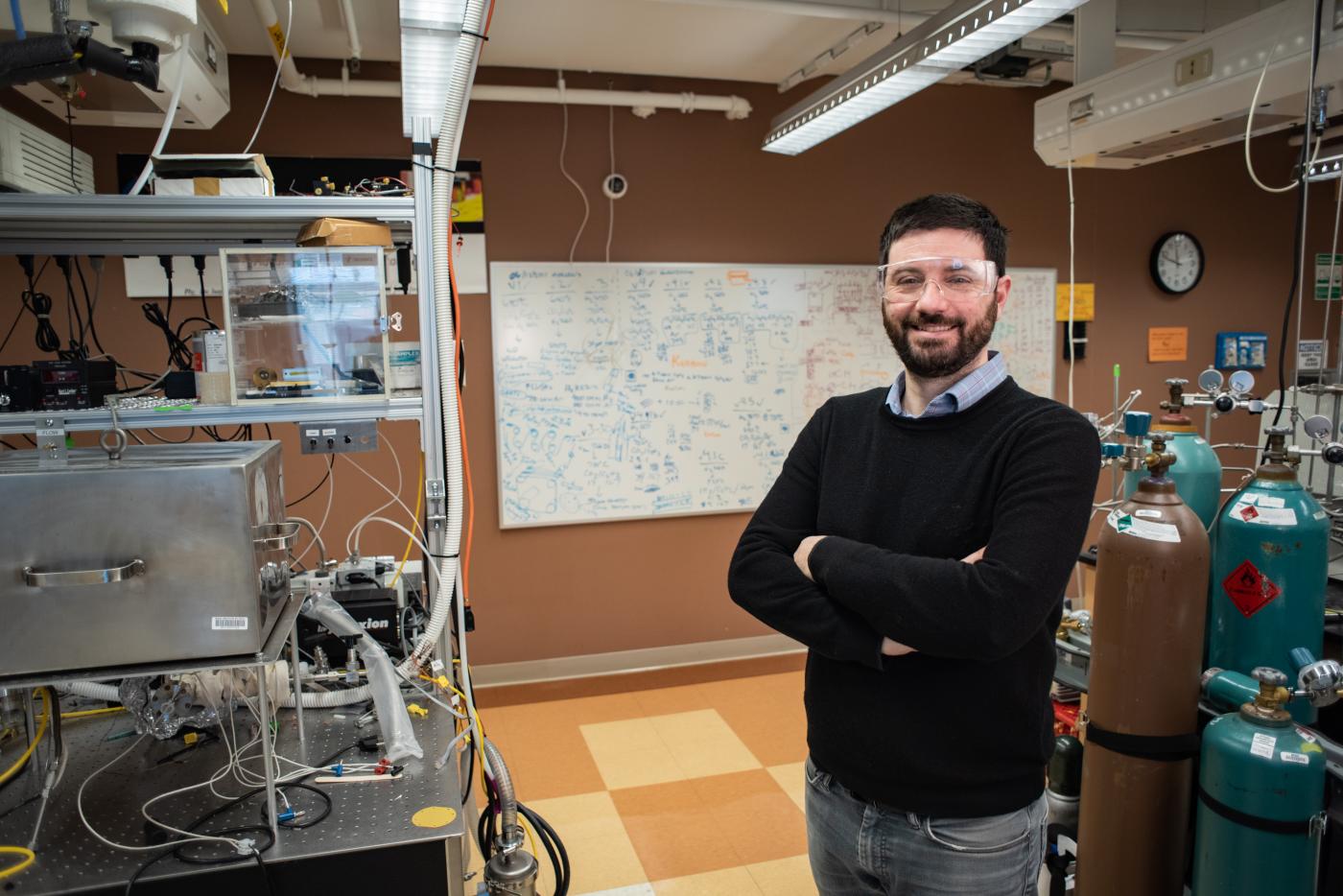