Drawing in details of the living brain

Drawing in details of the living brain
brain imaging

One reason that brain conditions such as epilepsy and Alzheimer’s disease are so hard to treat is that the brain is so difficult to study. Alan Jasanoff, MIT professor of biological engineering, finds ways to overcome these difficulties, by creating detailed maps of cell activity across wide areas of the living brain. His work aids basic research and may lay the foundation for novel ways to diagnose conditions and monitor their treatments.

“My chief interest is in understanding how brains function at the molecular and cellular scale, in a way where we can see much of the brain at the same time,” says Jasanoff, who is also professor of brain and cognitive science and of nuclear science and engineering.

“We do that by developing molecular probes that go into the brain,” he says. “These probes can respond to the cellular signaling that underlies behavior and cognition, or respond to neurochemicals like the neurotransmitters that allow nervous cells in the brain to communicate.”

Using these probes to map activities in three dimensions over time in animal models, Jasanoff studies how the dynamics of brain function correspond to significant brain activities. In one recent achievement, his lab developed functional magnetic resonance imaging (fMRI) probes that can detect signaling in the nervous system by tracking fluctuations of calcium within cells. “This is something that the research community has been dreaming about for a while,” he says.

Such techniques may find a number of practical applications—among them, delivering highly precise location information for brain regions that have been damaged by injury or epileptic seizures.

Combining top-down and bottom-up brain research
There are two traditional ways for scientists to analyze the brain: top down and bottom up, Jasanoff points out. Top-down research employs techniques such as fMRI, a non-invasive approach that gives images of the whole brain but not in much detail. In contrast, bottom-up studies look at the behaviors of individual cells, or parts of cells, using invasive tools such as electrodes and microscopes.

My chief interest is in understanding how brains function at the molecular and cellular scale, in a way where we can see much of the brain at the same time.

His lab seeks to bring together these two approaches. One main focus is on molecular-level fMRI—providing novel “contrast agent” probes that can identify specific molecules for fMRI imaging with very high levels of detail.

“For example, essentially every cell in the body signals by using calcium,” Jasanoff says. “Inside those cells, there are little pulses of calcium concentrations, and scientists have found it very effective to study neural activity by monitoring those concentrations.”

However, these studies are typically performed with optical probes—chemicals that can be visualized through a light microscope. That method doesn’t work with human brains. So he and his colleagues set out to solve the problem with fMRI, which unlike microscopes can look deep into tissue.

Creating a collection of calcium-sensitive fMRI probes, “we’ve shown that we can indeed detect cellular signaling in the nervous system,” Jasanoff says. “Our tools offer the potential for very precise monitoring of neural activity in three dimensions and over time.”

Working in rats, his group first showed that it could detect seizures, the episodes of uncontrolled neural activity seen in epilepsy. In some human patients with severe disease, surgeons aim to carve out the exact region where the seizures are originating, and this kind of precise imaging might be a powerful tool to pinpoint the region.

His lab is now using the calcium probes for basic science—for understanding how brain networks underlie cognitive and behavioral tasks in animals, such as decision making. “For instance, what are the changes that take place in the connections among different parts of the brain in addiction?” Jasanoff says. “There's been a lot of research in that area, but it’s been very hard to study the integrative function of the brain in the living person. Our tools could be used for that.”

Related projects pursue a variety of chemical signaling methods in the brain, including an MRI sensor for dopamine, a neurotransmitter commonly linked to rewards and addiction. “We’ve used our dopamine sensor to map aspects of dopamine signaling in the living brains of animals, which wasn't possible before our technology,” he says. 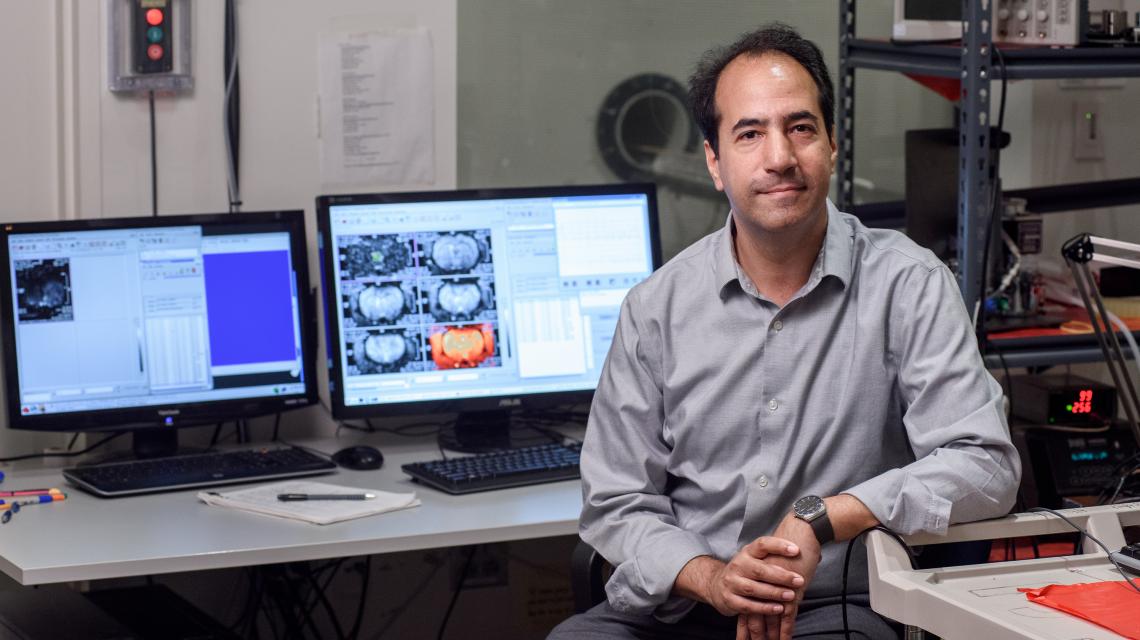 Bringing genetic tools to fMRI
Basic biological research has long benefitted from a genetic technique based on the green fluorescent protein (GFP). In this method, the GFP gene can be genetically added to an animal model and act as a reporter for a protein of interest, by glowing green under proper lighting.

Jasanoff and his colleagues are trying to engineer similar reporting tools for fMRI, by genetically modifying animal models to generate proteins that can act as probes. “This approach potentially establishes a connection between these remarkable advances that have been made in genetic models and our ability to study how individual genes and proteins function in the context of the whole body,” he says.

Most of the clinically approved diagnostic agents light up some structure in the body, rather than providing a dynamic signature of activity. Companies that develop these diagnostics potentially could help us explore industrial applications of our technologies.

Genetically encoded probes could help to identify the changes in the levels of specific proteins that cells produce as the brain matures and functions. Looking at these processes in animal models could increase our understanding of the processes that take place during learning and memory, he says.

Such tools also might help to examine how the many different kinds of nerve cells, and their supporting glial cells, all operate together. “Measuring the activity of those different types of cells, using genetic techniques in combination with our imaging probes, would be very valuable,” he says.

Finding routes to clinical diagnostics
Specialized molecular contrast agents currently are utilized in about a third of MRI scans. “Most of the clinically approved diagnostic agents light up some structure in the body, rather than providing a dynamic signature of activity,” Jasanoff says. “Companies that develop these diagnostics potentially could help us explore industrial applications of our technologies.”

Today, his imaging technologies are lab tools designed for basic research. Commercializing the technologies would require crossing a number of practical hurdles, such as finding ways to deliver them safely into the human brain. “But with recent advances in brain delivery techniques, it's quite feasible to think of the imaging probes that we make in the lab being useful in patients that need diagnosis or therapy monitoring,” he says.

To better treat people who have suffered a brain injury or developed a neurodegenerative illness such as Alzheimer’s disease, physicians need much more precise information about where the condition is located and how to categorize it. “Our agents could be given to these patients to answer those fundamental questions about their conditions,” Jasanoff says. 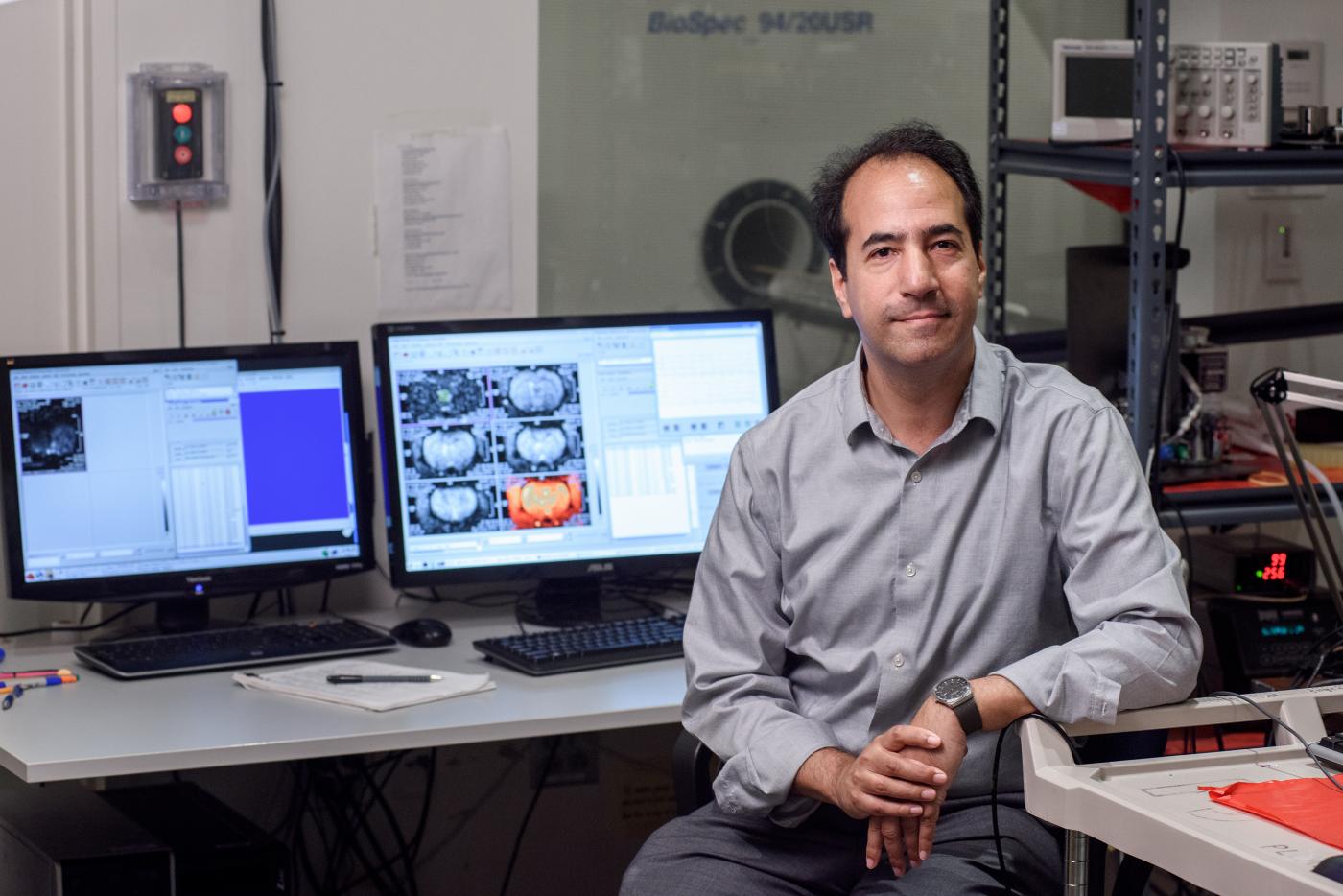