Given the incredible complexity of the human nervous system, we need much more sophisticated tools to understand it. That’s the challenge taken on by Polina Anikeeva, MIT associate professor of materials science and engineering and of brain and cognitive sciences.

“My team works at the interface between material science, electronics, and neurobiology, and we develop devices that will feel and behave like the nervous system, to interface with its complexity in a more organic way,” says Anikeeva. “As we learn more about how our devices can affect the activity of neurons in the context of health or disease, we hope to use them for both diagnostics as well as future treatments.”

Magnetic nanoparticles are her group’s other main focus. “We develop particles that are essentially tiny magnetic crystals, and these particles can either dissipate heat or transduce force when you expose them to a magnetic field,” she says. “We use this local heating or a small local force to stimulate neural activity, which can also be used either to control nervous system or stimulate growth. And this technique has an advantage because magnetic fields go through the body unattenuated and without causing any harmful effects.”

Drawing fibers into multiple channels
Traditional probes for research on the nervous system are made of stiff materials such as metals and semiconductors that can harm tissue. Anikeeva’s flexible fibers, drawn from plastics and composites, still can integrate optical waveguides, electrodes, and hollow channels for microfluidics.

The optical channels are designed for optogenetics, a research method that allows investigators to stimulate or inhibit certain cells in lab animals with light following their genetic modification. The electrodes and microfluidic channels let researchers record electrical signals from the cells, and simultaneously deliver drugs or other agents.

“Our devices were the first ones able to modulate nervous system brain circuits optically, chemically and electrically all at the same time,” she says. “Now we can study how some neurological and mental disorders develop, and we may potentially use the same functional features to treat some of those emerging symptoms in real time.”

Additionally, her group is constructing fibers designed as scaffolds to help nerves regrow, for example after spinal cord injury. Spinal cords have some natural ability to regrow, but scientists don’t have a good understanding of when and how this happens.

Our devices were the first ones able to modulate nervous system brain circuits optically, chemically and electrically all at the same time.

To bridge the gap across a damaged spinal cord, Anikeeva’s lab has created devices that can both act as scaffolds, to support the natural growth of neural tissues, and stimulate signaling across the gaps between neurons. And since spinal cords need to stretch and bend, the researchers have created flexible and stretchable devices for these applications.

In experiments in mice, “we have observed nerve growth through our fibers and have also used our microfluidic channels to infuse a variety of neurochemicals,” she says. “In principle, those channels also may be able to infuse growth factors and other molecules that can help a nervous system to regenerate.”

Her group’s nanoparticles are held in a solution that looks very much like espresso, as Anikeeva points out. When these solutions are infused and magnetic fields are applied, “these nanoscale transducers can allow us to stimulate neurons on demand,” she says. “Rather than having even a minimally invasive device, we have just this liquid that is billions of devices, each of them a few nanometers in diameter.”

Exposed to an alternating magnetic field, these magnetic nanoparticles heat up, which can open a specific type of molecular channel in the membranes of nearby neurons that normally can be activated by pain or capsaicin in chili peppers. Opening these channels electrically excites the neurons—basically turning them on. “The result could be an activated neural circuit that has previously been inactive, for example, in depression or Parkinson’s disease,” she says. 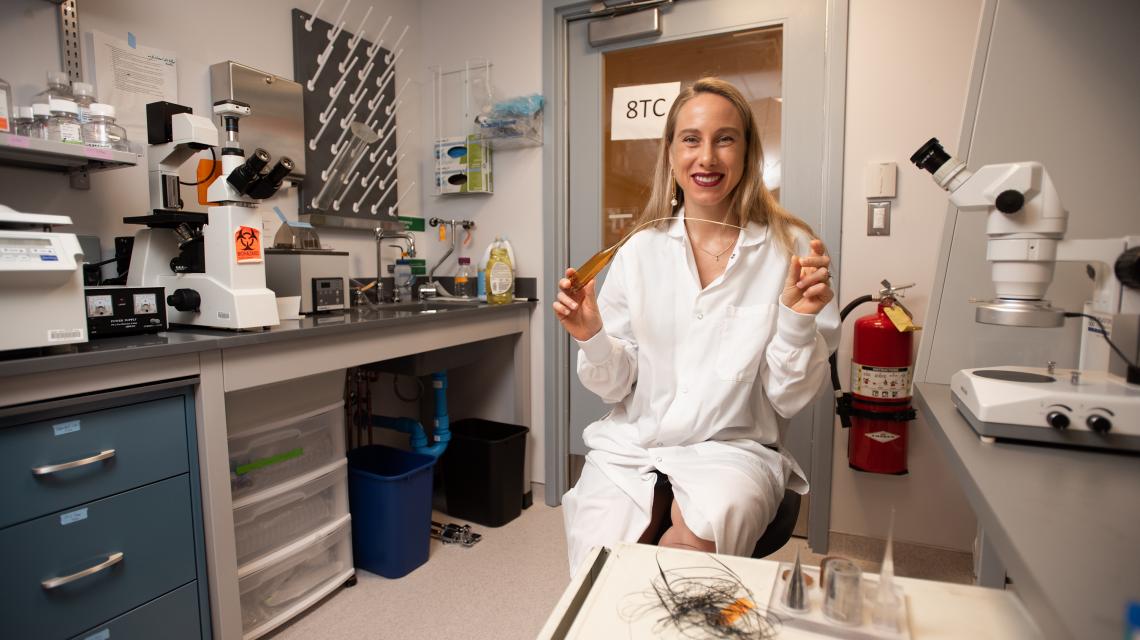 To deliver these nanoparticles precisely remains a tough problem. In the future, she hopes that the particles can be injected either intravenously or through cerebrospinal fluids, and then guided by magnetic field gradients to the desired location.

Pleasantly and surprisingly, however, the researchers discovered that the particles could remain in nervous system for months, perhaps because the particles are wrapped in a chemical shell that allows them to dodge the immune system that would normally flush them out.

Moving toward medicine
MIT offers a unique environment for Anikeeva’s work, giving her the chance to collaborate with leading researchers in both engineering and neuroscience. It also provides unmatched facilities, such as the MIT.nano center. “For someone like myself who already works at the intersection of multiple disciplines,” she says, “it’s absolutely crucial to have resources that are very forgiving of strange materials and strange devices—things that a normal fabrication facility or a normal imaging facility will simply be unwilling to handle.”

For someone like myself who already works at the intersection of multiple disciplines, it’s absolutely crucial to have resources that are very forgiving of strange materials and strange devices—things that a normal fabrication facility or a normal imaging facility will simply be unwilling to handle.

While most of her research is funded by federal agencies, “working with industry informs our research, which will make it a lot more focused and bring it closer to patients,” she says.

In one current industry partnership, a visiting researcher is studying applications of fiber technologies to neuroscience. Her lab’s investigators have benefitted from learning how an engineer with industry experience approaches problems, and the engineer has been exposed to a “wonderful playground” at the frontiers of research, she says.

Anikeeva also now is beginning to talk with clinical researchers about translating her devices for studies in human patients. “This is of course a long road, and we're just getting started, but we're very excited about it,” she says.

She believes that, in time, the technologies she is pioneering will offer pharmaceutical and medical device companies a competitive edge, with the ability to deliver precisely targeted therapies that avoid the side effects from conventional drugs.

Such treatments also may find targets far beyond traditional neurological disorders such as depression and Parkinson’s disease. “It turns out that many diseases, even those that we previously didn't think had electrical or neural origins, may be treated through treating neural communication,” she says. “For example, some clinical studies have suggested that arthritis can be treated with neuromodulation.” 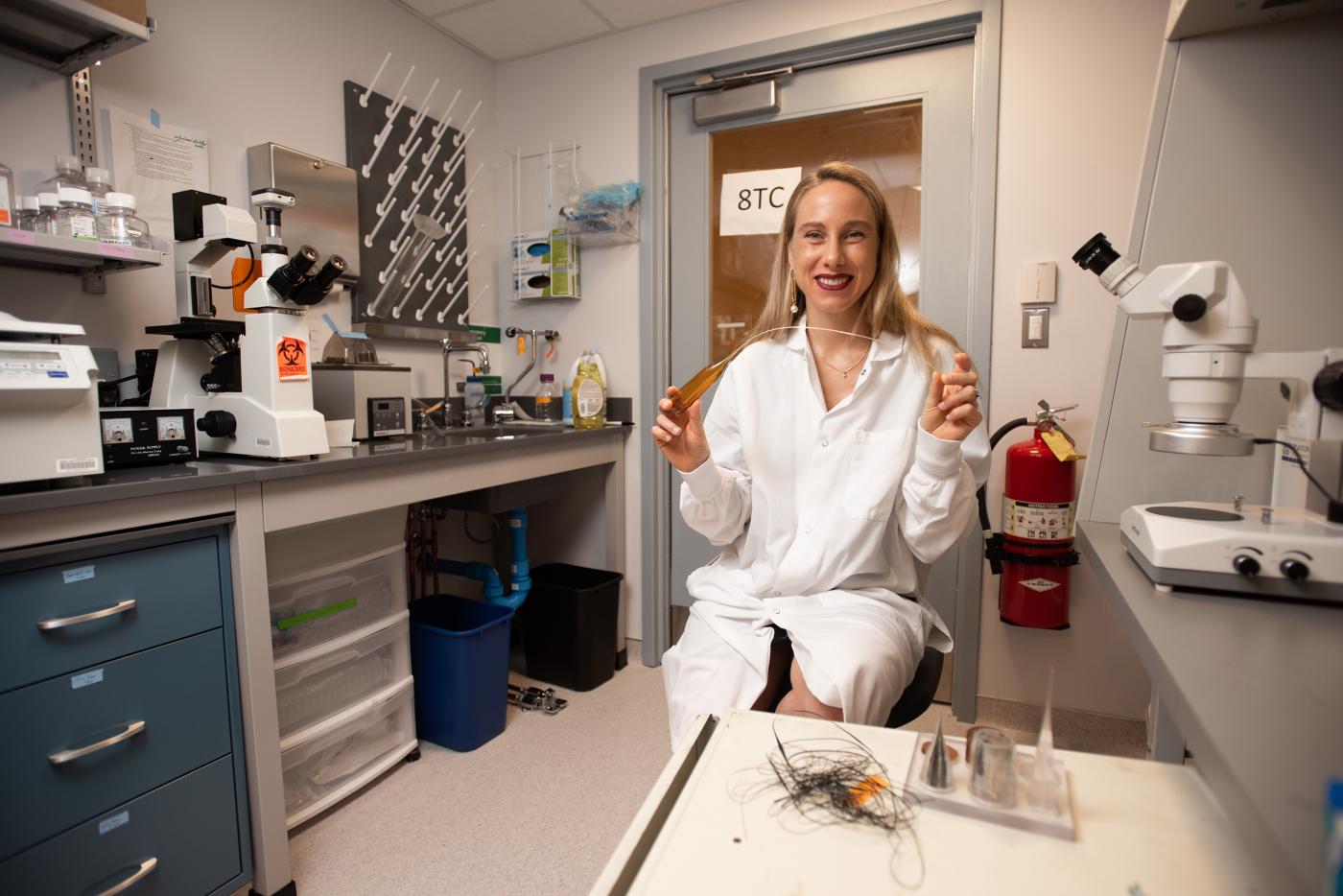