Research involves a commitment to the unknown. There are probabilities, but no guarantees about the endpoint, other than that time, money and energy will be spent. Heather Kulik looks to minimize the uncertainty. With her team, the assistant professor of chemical engineering works on better understanding catalysis and designing new materials. Through advanced computer modeling and software designed in her lab, there’s now the ability to predict material behavior through simulations and to study more materials in less time and with a greater level of accuracy. Taken together, the screening process becomes more efficient and provides a kind of roadmap to what’s chemically possibly without the need to do full-scale experiments. “This will open up the types of materials we can study,” Kulik says. “This will widen it even further.”

Playing on the smallest scale

Kulik looks at electronic structure methods, particularly understanding electrons. They’re studied but remain largely misunderstood. The challenge is that they don’t act like bigger particles. Instead of sitting in one place, they’re spread out, like some sort of “fuzzy cloud,” she says.

It makes the methodology more complex. The needed equations are time-intensive to formulate and still can’t be easily solved on paper, except for the smallest systems. Gross approximations end up being made, and electrons commonly become either over-localized or over-delocalized. That balance is important, Kulik says, because the interplay between localization and delocalization governs chemical reactivity in something like oxygen transfer in hemoglobin or in a heterogeneous catalyst.

A main focus of hers is using computers to predict what will work, and, as importantly, what won’t work, without introducing bias from chemical intuition. The traditional challenges have been twofold. Computationally expensive models may be impractical to employ on real world systems and would also have limited applicability. Lower cost methods that enable large-scale simulation can be used, but they come with a loss of accuracy. 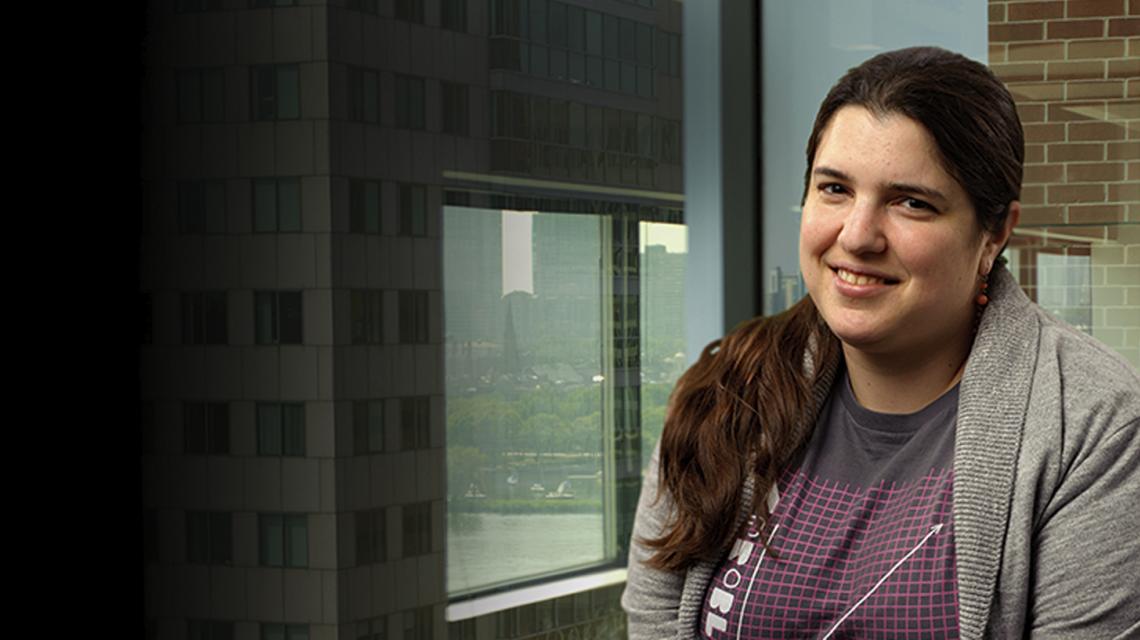 Kulik says that her team’s goal is to find the optimum of “pushing out how accurate for how large a system size we can study.” Computers have naturally gotten faster, and over the last 10-20 years, modeling has made a significant leap, allowing large, realistic problems, essentially, anything involving a chemical reaction, to be studied at the nanoscale. Her lab developed software that leverages graphics processing units (GPU), essentially putting a super computer into a desktop. “Before when you used to be only able to study a handful of atoms, you can now study thousands of atoms with the same level of accuracy,” says Kulik, adding that they also study the fundamental approximations made in models in order to improve accuracy for study of realistic catalysts and materials. “There’s now a greater understanding of how a result would change if the approximations made in the simulation changed.”

Two other developments have helped. The aforementioned software also comes with a user friendly graphical interface, which has enabled automated catalyst discovery. Rather than just carrying out high-throughput screening, all results are then encapsulated into a materiaphore, a 3D structure that was developed in her lab and that’s a takeoff on what’s used in drug design, which works like a smarter template to allow further iterative improvements in screening. In essence, it’s a kind of prescreen, breaking one of the significant bottlenecks in chemical design, Kulik says. This increased sensitivity means that a company or researcher can find quality leads to potential materials, such as how a metal binds with a substrate for a chemical conversion, without having to go through a time-consuming simulation. “We can make five predictions and have one turn out to be right rather than making 10-100 predictions and having only one turn out to be right,” she says. “What once took half a week to do can be done in half an hour.”

More than producing a specific application, her work deals with the more fundamental elements of screening and identifying materials. A key component in her approach is bypassing human intuition to discover new rules for chemistry and chemical reactivity. With some of her work, she says that she won’t know the design rules going in and will purposely explore unconventional molecules in order to create new models. “When we rely only on experimental intuition, we’re only going to get back out things that people have already done before,” she says.

An example in her lab, Kulik and her team are trying to identify improved properties of precursors used in the synthesis of quantum dots. A main challenge and desire is to be able to make them uniformly for the commercial scale. Controlling the precursors, which are mixed to make the dots, would control both the size distribution and the wavelengths at which they would absorb and emit light, and would end up improving such functions as high performance display technology and working as a non-toxic replacement for cadmium selenide (CdSe) in imaging, she says.

Doing those kinds of experiments in a lab would be useful, but they’d also take time, money and precision. Always-improving computers make it possible to view wide spreads of precursors, see the underlying chemistry and get a sense of what kind of dots would be produced. The information would bring an efficiency in better knowing which experiments would be best pursued and which should be avoided. It’s a work in progress, but, as Kulik says, “better, more accurate modeling is starting to push us now finally towards being at that place.”