But Mathias Kolle’s Laboratory for Bioinspired Photonic Engineering does just that, because one species of the colorful insects offers a powerful model for the mission of creating advanced bio-optical materials.

“We care about how light is reflected, transmitted or collected at a surface, and we take inspiration from nature because there are many organisms that solve problems that we also have in applications,” says Kolle, assistant professor of mechanical engineering at MIT.

“We focus on dynamic optical systems that you can control at will to change their properties—their light collection abilities or colors or reflection,” he adds. “That control has a lot of promise in many applications.”

Among the applications he studies are stretchable optical fibers that can sense pressure, optical devices using droplets to detect chemicals, and fibers that can deliver both light and carbon dioxide to microalgae cultures for biomass generation. Kolle’s lab builds devices to understand and prototype such approaches, and he looks for partnerships with companies that offer imaging and sensing technologies, paint and display products, and textiles, among others.

We focus on dynamic optical systems that you can control at will to change their properties—their light collection abilities or colors or reflection. That control has a lot of promise in many applications.

“In nature, organisms don’t optimize for one function,” Kolle says. “The surface of an organism doesn’t just do optics; it must ensure desirable mechanical properties, and enable flows and the exchange of nutrients or gases.” 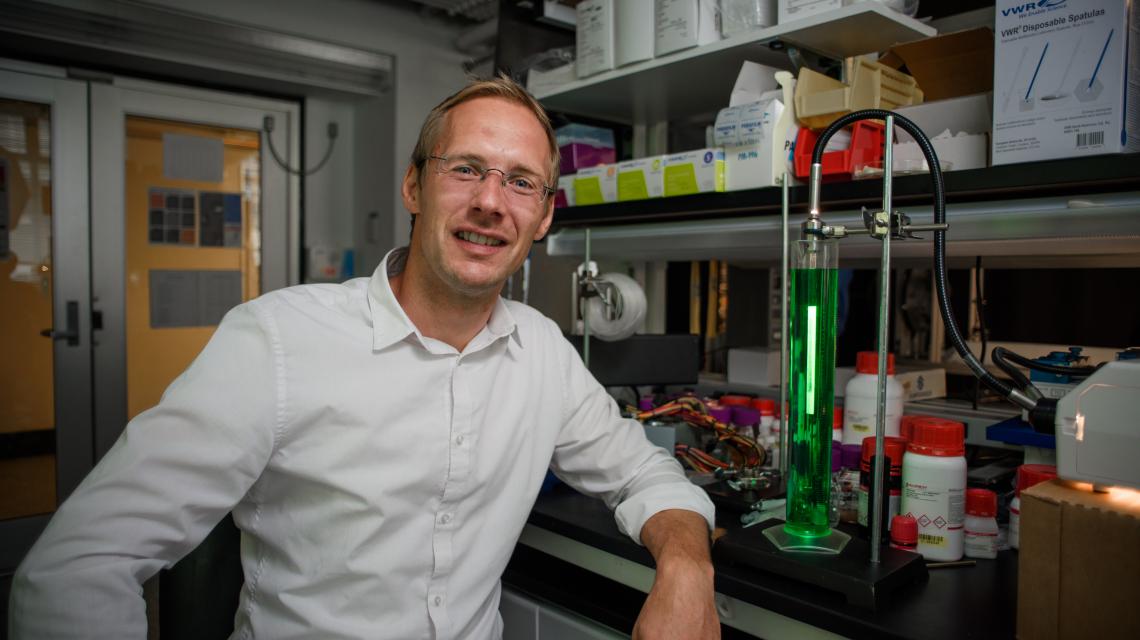 The colored scales on Vanessa cardui butterfly wings offer a good model, for example, because they provide this combination of functions within structures formed from single cells.

“However, we don’t know yet how organisms form these structures,” he notes. “We know how they work, but we have no idea how they come about. Our ultimate goal would be to see how the cells form these structures, and find handles that we can pull to manipulate the formation process. Then we could make bigger scales or smaller scales or different colors, and then extract these scales and grow them on any surface.”

Perhaps one day in the future, “I can buy a can of these cells at Home Depot, spray the cells on a wall, spray another trigger on them, and the cells form whatever color and pattern I want,” he suggests. “If I get fed up with that surface, I can brush off the cells and spray on another surface. And all the materials are completely biological.”

Much closer to commercial reality, his lab is working on photonic fibers “with a little twist to them—they are elastic,” he says. “You can deform them, and as you deform they change their color.”

These fibers initially were inspired by a type of bright shiny blue fruit found in tropical Central and South America. The fruits create the color with a nanoscale layered architecture that generates optical interference.

“The fruit is bright blue because it wants to be eaten by birds who can disperse the seeds,” Kolle says. “For us, the advantage with stretchable photonic fibers is to connect visual appearance with mechanical properties to measure deformations, forces, or pressure.”

His group modeled the fruit’s optical architecture in photonic fibers made with elastic materials. When you deform the fibers, you change their structure and that in turn changes the colors they reflect, he says.

Kolle’s lab partners on integrating the fibers with bandages with Matthew Carty, a plastic surgeon at Brigham and Women’s Hospital; Jennifer Lewis, a professor of bioengineering at Harvard University; and other colleagues.

Treating some conditions, clinicians need to monitor the exact pressure underneath a bandage, but typically there’s no good way to tell, he says.

The researchers have built fibers that change their color as they stretch under pressure. “We can stitch these fibers onto the bandage, and then when you wrap the bandage around the person’s arm or leg, you could tell the pressure you exert by the color of the fiber,” he says.

Elastic photonic fibers also can deliver other information by carrying light signals within them. That technique would allow the creation of knee braces that monitor your movement, or gloves that can create a “virtual hand” that moves in synch. Down the road, such gloves might aid in operating sophisticated machinery or surgical tools at a distance, or in delivering virtual reality experiences. (As a lab prototype shows, this technology already lets you play “virtual piano”.)

Another main thread of research is optical materials based on fluids and other soft materials. Here, the advantages include the ability to easily change structure—which in turn alters optical response.

One initiative is a collaboration with MIT professor of chemistry Timothy Swager and Lauren Zarzar, formerly a postdoc in the Swager lab and now assistant professor at Penn State. Back in 2015, Zarzar and the Swager lab showed that microscale droplets formed from two or more liquids can create an optical interface that can be manipulated by changing the surrounding chemistry.

These droplets open up interesting opportunities in chemical sensing. “Put a chemical trigger on the surface of these droplets, and you change their conformation, and that means the optics changes,” Kolle says. “So you might have a really efficient way of analyzing the contents of a chemical solution.” His group is now aiding Swager’s lab in research toward cellphone-based droplet sensors that could rapidly detect pathogens or other biological components of interest, for example.

Put a chemical trigger on the surface of these droplets, and you change their conformation, and that means the optics changes. So you might have a really efficient way of analyzing the contents of a chemical solution.

Another intriguing option for these droplets is imaging. One might take a droplet about half the width of a human hair, Kolle suggests, and capture images projected through it. Combining such a droplet lens with a CMOS imaging sensor (like those in cell phones) might produce a tiny microscope that you could take anywhere, he says. Integrate this microscope with a microfluid channel device that can accept a blood sample, for instance, and you might get a quick diagnostic tool that would be invaluable in community medical clinics.

A third main effort in the Bioinspired Photonic Engineering lab looks at growing algae for biofuels—a long-term R&D goal around the world, given the high productivity of algae cultures and their relatively low environmental demands.

Kolle seeks instead to bring the light and carbon dioxide to the algae. The idea is to structure optical fibers so they emit similar amounts of light at various depths, and to form the fiber cores in ways to transfer carbon dioxide as well. “That would allow us then to produce more mass of algae in deeper culture volumes at the same surface area,” he notes.

His lab is building small-scale algae-growing prototypes, and collaborates with Arizona State University engineering professor Bruce Rittman to investigate ways to take the technology to an industrial level.

As in this case, scaling up lab technologies for commercial viability is a constant challenge for the lab, says Kolle. Industry partnerships are key to overcome the barriers.

“In our lab, we look at how far we can push materials to make them optically interesting and mechanically robust,” he says. “I enjoy our discussions with companies because they frequently point out real problems. ‘Should we look at these material components, should we look at these formation principles, is this the best way to analyze the materials?’ We learn what the company is looking for, and then we see whether we can solve that problem.”