Designing medical devices to bend with the body

Designing medical devices to bend with the body

Medical devices designed to be wearable or implantable face one huge design barrier: We humans are softies. Our body tissues are orders of magnitude less stiff than the traditional electromechanical devices that we use to treat or study disease, which can limit the success of those devices.

Why does she call her devices “decoders”?

“We live in an ocean of physical patterns, such as heart beats, respiration, muscle movements and neuronal activities,” she explains. “These physical patterns contain information in coded ways, and we decode these messages via our mechanically adaptive electromechanical systems.”

She calls her devices “conformable” because they are flexible, stretchable and tailored to each application. “We want patients to wear these devices comfortably and seamlessly, so they can continuously monitor their health conditions,” she says. “That will help their doctors understand how to personalize medicine for them.”

We live in an ocean of physical patterns, such as heart beats, respiration, muscle movements and neuronal activities. These physical patterns contain information in coded ways, and we decode these messages via our mechanically adaptive electromechanical systems.

Dagdeviren’s flexible systems target everything from charging heart pacemakers to monitoring cancer via ultrasound to delivering and analyzing treatments in the brain. Her prototype designs are drawing the interest of biomedical device makers, pharmaceutical companies and textile manufacturers.

Her group assembles these super-thin prototypes in a cleanroom in her lab, beginning with traditional micro fabrication techniques on silicon wafers. “We fabricate the entire device on top of a sacrificial layer on top of the wafer,” she says. “Then we lift off the device and transfer-print it on any target substrate. This way we can make the devices as thin as possible, so you can simply laminate them on your skin or embed them in a textile.” 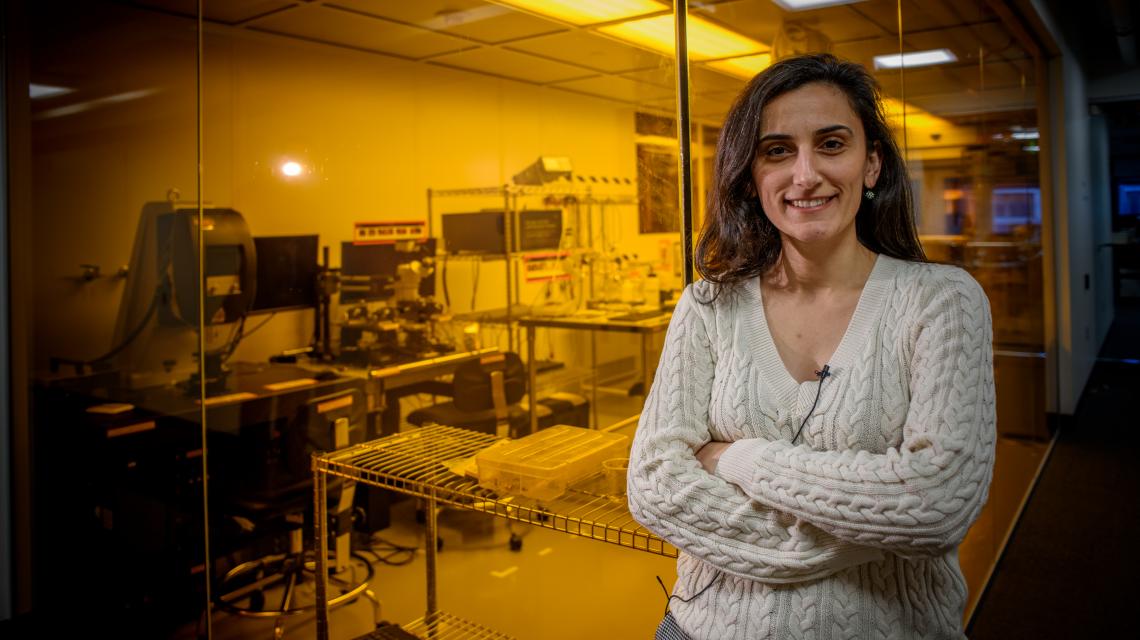 Power in a heartbeat

Dagdeviren began thinking about medicine when she was five years old and learned that her grandfather had died of heart failure at the age of 28. “I promised myself that I would do something to tackle this heart failure problem when I reached the same age,” she says.

Training as a physicist and material scientist, she met that goal, developing a prototype of a cardiac pacemaker energized by the heart itself.

Pacemakers are proven lifesavers, with more than a million implanted annually around the world. One of their biggest limitations is that their batteries must be swapped out surgically every six years or seven years, she says.

But our hearts generate plenty of energy. Dagdeviren’s idea was to tap into that energy with a piezoelectric mechanism—using materials that generate electrical current when they deform.

She and her colleagues successfully demonstrated a piezoelectric energy harvester in tests on live cows and pigs. Such harvesters might double the lifespan of a pacemaker, she says.

Her group is now applying this energy-harvesting approach to wearable devices that could be attached to joints such as knees or elbows. “You could generate electricity from your daily movements, such as walking or simply moving in your office chair, and send the electricity to the needed electronics,” she says.

Flexible energy-gathering patches may find many roles in health monitoring. For instance, a self-powered monitor could steadily track patients with Parkinson’s disease to see how well they walk—a key indication of the progress of this neurodegenerative disease.

Dagdeviren’s lab is also fabricating prototypes of self-powered stretchable ultrasound patches carried on t-shirts or other clothing worn next to the skin. “You can just laminate that platform on your personal garments, and it will conform to your body,” she says. The tiny ultrasound arrays could search for stiff areas in soft tissues, aiming to detect or monitor skin conditions or cancers such as melanoma.

If the patch is comfortable enough, it could collect a flood of data over time, rather than just once every few months as with current ultrasound checkups. “You could wear your t-shirt with the device as long as you're happy with it, and collect data that can be used to create a patient-specific map for you,” she says. “That will help your doctor understand how the tissue itself is responding to the medication that you take, or the food that you eat, or the sleep that you get.”

Bringing multiple tools into the brain

Another personal connection for Dagdeviren, an aunt who died of brain cancer, sparked her research into instruments to study the brain. “To really understand how the brain is functioning, we need the right tools to go inside the brain and explore what's happening in the circuits there,” she says.

To really understand how the brain is functioning, we need the right tools to go inside the brain and explore what's happening in the circuits there.

Her lab is developing multi-function needles that are as thin as human hairs but can reach structures in the brain with pinpoint accuracy. Collaborating with colleagues at MIT’s McGovern Institute for Brain Research, “we try to explore in the deep brain of animal models to understand the underlying mechanisms of Parkinson's disease and other types of neural degeneration,” she says.

“We want to study all the variables together and come up with new ways of treatment,” Dagdeviren says. “For example, we really would like to investigate how neurodegeneration is progressing while you are infusing a drug and doing brain stimulation.”

Her collaboration with McGovern Institute investigators is one example among many within MIT and the greater Boston biomedical community. “I can find any kind of researcher in this hub,” she says. “During lunch, I can discuss a problem with one of my colleagues, and then a person next to our table may just jump into the conversation and provide a solution. Working here as a junior faculty member is a great opportunity to accelerate my research.”