Charging up chemistry for a cleaner planet

Charging up chemistry for a cleaner planet

Yogesh Surendranath develops electrochemical reactions that could aid in the transition to renewable energy.

“In my group, we're trying to change how one third of the global economy works,” says Yogesh (Yogi) Surendranath, MIT associate professor of chemistry.

Surendranath focuses his research on how to use electricity to rearrange chemical bonds, at the atomic level. “That may sound a little abstract,” he says, “but it’s a central problem in how we transition ultimately to a far more sustainable and economically prosperous energy economy.”

One promising application for this new surface chemistry is converting the methane produced by petroleum drilling to a more easily transported liquid form. Another potential application is using renewable energy to convert carbon dioxide into fuels and other useful products.

Surendranath’s work has received strong backing from energy companies and other firms. “Industrial stakeholders are recognizing the importance of investing in the basic science that's done at MIT in order to come up with next-generation disruptive technologies,” Surendranath says. “MIT also can act as a knowledge house, providing the insight that will ultimately form the basis of the emerging future technologies that will define a new landscape in energy.”

Industrial stakeholders are recognizing the importance of investing in the basic science that's done at MIT in order to come up with next-generation disruptive technologies.

Studying bonds at the boundary

When using electricity to rearrange chemical bonds for desired reactions, the crucial interface is the boundary between a solid and a liquid, says Surendranath. Typically the solid is a conductive material that brings in electrical current, and the liquid contains the molecules used for the reaction, he explains. His group manipulates those interfaces and engineers them at the atomic and molecular level.

“Our forté is in combining a range of tools to understanding the individual steps of a chemical reaction at an interface,” he says. One set of tools employs light to shine on that surface to understand processes at the atomic level, while other tools allow the researchers to build those surfaces from the bottom up.

“We can hone in on the factors related to that surface chemistry that we can manipulate in a systematic way to tune each reaction,” Surendranath says. “That allows us to then rationally design the surface again with a new active site, a new material or a new molecule that allows us to do the reaction better and better. And this iterative process allows us in a systematic way to tackle a whole host of problems in energy storage, energy conversion and fuel processing.” 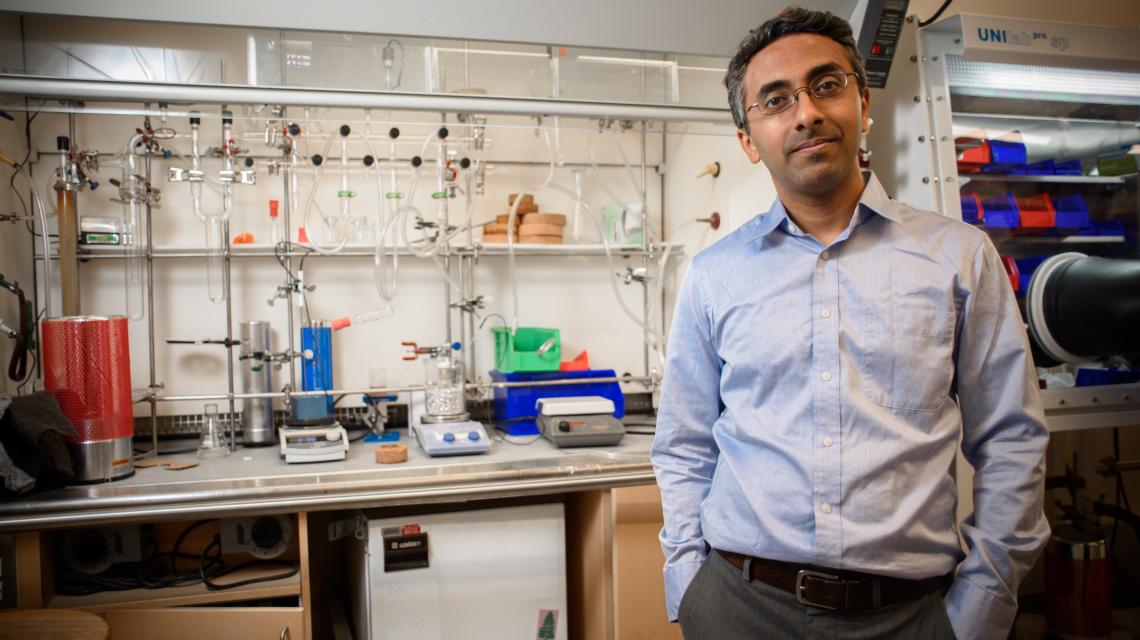 Conversion for greater energy efficiency Among the results, his group has developed a method to modify the surfaces of low-cost carbon materials with specific sites that can do unusual catalytic reactions, he says.

For example, the technique lets you take carbon dioxide and use renewable energy to convert it to a whole host of different products. Those products might include methane, which can go into a natural gas distribution system, or ethylene, a commodity chemical that's important for plastic manufacture, or ethanol, a common liquid fuel.

“The fundamental problem with how you convert carbon dioxide to fuel is selectivity,” says Surendranath. “You need catalysts that are extraordinarily selective, meaning that they only make one product but not the others. We’ve developed a comprehensive understanding of each step in the reaction, and we've also developed general design principles for designing new materials with improved selectivity for one product over another.”

Another key initiative in his lab focuses on converting methane to a liquid fuel. Methane is a key fossil fuel (the core constituent of natural gas) and a crucial feedstock for industrial products ranging from pharmaceuticals to plastic. It’s also a major contributor to climate change. “Remarkably, an enormous amount of methane is simply burned onsite, because it is often found in remote areas where there’s no easy way to transport it to market,” Surendranath says.

“We’ve developed a fundamental chemistry that opens the possibility of taking stranded reserves of methane and converting them into methanol, a liquid fuel and important chemical intermediate that can be much more easily distributed and utilized,” he says. Ultimately, his goal is to embed this chemistry in portable devices that can be deployed at remote drilling sites.

Chemistry for cleaning up

Surendranath also studies ways to employ electrochemical technologies and renewable electricity for environmental cleanup. One goal is to fix polluted water streams, by converting oxygen into disinfectants such as hydrogen peroxide.

“Technologies like that would be really transformative in enabling portable environmental remediation efforts across numerous sectors,” he notes.

“In many parts of the world, sanitation and clean drinking water are enormous challenges that impose enormous societal pressures,” he says. “But the sun shines everywhere and the wind blows everywhere. Deploying renewable electricity to do chemistry that's in the service of these desperate needs ultimately will allow the democratization of the environmental benefits, and the societal good that can come from that.”

Paying off for industry

In addition to support from national research agencies such as the Department of Energy and the National Science Foundation, Surendranath’s research has gained traction among industrial players including Eni, Exxon Mobile and Saudi Aramco.

Partnerships created through the Industrial Liaison Program have high value on both sides, he emphases.

We would never be exposed to those opportunities if we didn't have industrial stakeholders to explain their business needs and their business cases to us.

“Interactions with a company can expose us to opportunities in the marketplace that our unique technology may help to solve,” he says. “We would never be exposed to those opportunities if we didn't have industrial stakeholders to explain their business needs and their business cases to us. It’s critical that we look beyond our disciplinary silos to understand where the real problems lie. And it also means that our science has a much greater likelihood of making a huge impact ultimately in the marketplace.”

“If we want to make low-carbon fuels, we’ll have to radically alter how we do things, and there need to be many partners in that process of innovation,” Surendranath says. “We see ourselves as the foot soldiers at the very early part of that problem, focused on the fundamental science. One of the values of being at MIT is that we have an enormous ecosystem to then take that further—to devices, to deployment and ultimately into the marketplace.”

“I cannot guarantee that every time I engage with an industrial stakeholder that I will be able to produce for them a technology that will affect their bottom line five years from now,” he remarks. “What I can guarantee is that the knowledge they'll gain from that interaction will allow them to be better positioned to make strategic decisions. We see ourselves as providing knowledge and insight just as much as we provide opportunities for transformative technologies.”