Professor of Nuclear Science and Engineering

In the grand global march toward clean energy, batteries bring up the rear—constraining the performance of everything from tiny sensors to smartphones to electric cars to the electrical grid.

That’s a challenge taken on by Ju Li, MIT professor of materials science engineering and of nuclear science and engineering. Supported by corporate partnerships, his battery research ranges from fundamental chemical and mechanical studies to creating prototypes for commercial systems.

“Long-lasting, cheaper and safer batteries will give us higher and faster penetration of renewable energy electrified systems,” Li says. “In this endeavor, it’s crucial to pay special attention not only to performance but to cost and environmental impact.”

Long-lasting, cheaper and safer batteries will give us higher and faster penetration of renewable energy electrified systems. In this endeavor, it’s crucial to pay special attention not only to performance but to cost and environmental impact.

Raising the bar on energy density

Lithium-ion batteries represent today’s state of the art for powering smartphone or electric vehicles. However, these devices are hitting the ceiling on energy density, at around 270 watt-hours per kilogram and 700 watt-hours per liter. Li’s group aims to boost those limits significantly.

“To do that, we have to use new chemistries,” he says. “We also have to achieve good compressed density as well as reduced cost. All these goals require new chemistries and microstructures, new developments in electrolytes, and new processes.”

Batteries have three main parts: the high-voltage cathode, the low-voltage anode, and the electrolyte that holds the ionic current between them while forbidding electrons to cross. “These three material subsystems have to work with each other very well,” Li says.

In one set of efforts, his lab explores chemistries for cathodes that exploit reduction-oxidation reaction of heavy-metal cations such as nickel, manganese and cobalt simultaneously with that of light anions such as oxygen or sulfur. “With this approach, we can get a lot more energy out of the cathode material,” he says. However, researchers must ensure that no oxygen is released from the cathode, or other unwanted reactions which would lower cycle life.

Other projects develop new anode materials. One line of research looks at high-capacity anodes (such as silicon carbon composites, tin and aluminum) where a major challenge is that the materials tend to expand in volume during use. In addition, the lab examines lithium metal anodes, which provide extremely high energy densities but can bring significant safety concerns. His group also invents new electrolyte chemistries that work well with the new cathodes and anodes.

One notable accomplishment came in 2016 with the fabrication of a fully sealed lithium-oxygen battery chemistry, designed to offer the high energy density of lithium-air batteries without the need to pump air. In this sealed battery, the oxygen never becomes a gas. Instead, the battery incorporates a glass made of nanoparticles that contain various forms of lithium oxide, with the nanoparticles embedded in a matrix of cobalt oxide.

“Batteries like these are very complicated systems and we need to balance all these different criteria simultaneously,” says Li. “That’s why a systematic approach and a fundamental approach from the perspective of chemistry, material science and mechanics are crucial for making advances in this field.” The lab also produces and tests working prototypes of both coin-cell batteries and midsized power-cell batteries. 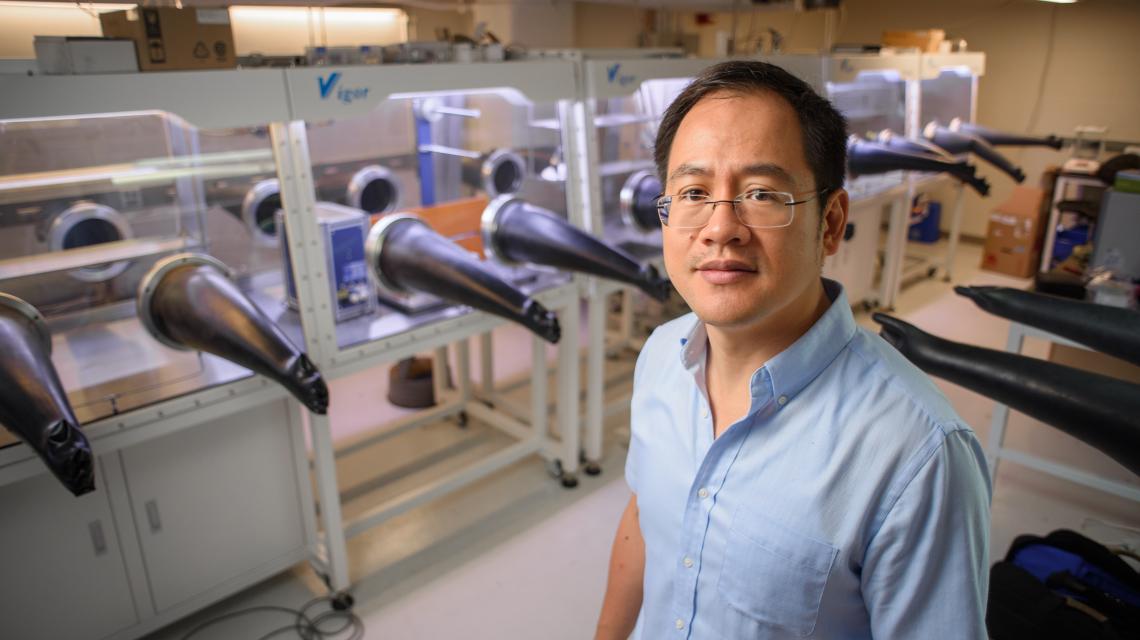 Each new generation of smartphones brings more powerful processors, higher-resolution screens and faster network connections. Unsurprisingly, these phones are ever-hungrier for electrical power. “There is a relentless push on what people require of those batteries,” Li says.

Among the newer demands, manufacturers now are interested in making cell phones that can fold up, which call for deformable batteries that work in parallel with deformable screens, Li says.

As researchers push a variety of battery technologies, they must be careful to avoid designs that can overheat or short out. “Safety is especially important for consumer electronics, which we carry so close to our bodies,” he points out.

In research supported by Samsung, his lab has created cathodes that hybridize lithium sulfur with cation redox chemistries, achieving greater energy densities than available with either traditional lithium ion or lithium sulfur approaches.

Li also is interested in a very different application: drones, where better batteries can make a huge impact. “With standard lithium ion batteries, the flying time is limited to 20 to 30 minutes, which limits the radius of accessibility,” Li says. “If we can double the battery capacity, we can double the radius it flies and quadruple the area it can access.”

In creating energy storage for electric vehicles, “you are always torn between energy density, safety and cost,” Li says.

Today’s compromises are far from ideal. The range of current electric cars is severely limited by their lithium ion batteries—in the case of the 2017 Chevy Volt, about 260 miles per charge. “To be competitive against gasoline automobiles without government subsidy, we need to have batteries with 50% more energy density,” he says. Faster charging (from half an hour to a few minutes) would also make a big difference.

Another critical requirement is handling thousands of charge cycles, which will not only save on battery replacement expenses but reduce environmental impact, Li points out.

Scaling up the grid

This intermittency creates a lot of difficulties and concerns about pricing for municipalities that want to use renewable energy. Better batteries that scale up well are a critical component to stabilize the grid—but the ability to scale must be immense. “We need capacities like 1000 megawatt hours of electrical storage for 10,000 cycles,” he says.

His lab is working with General Electric on grid storage solutions, especially on inexpensive and long-cycle-life anodes. “Lithium metal is a wonderful material for an anode in terms of capacity and voltage, but it can bring major problems in structural stability,” he comments. “By developing 3D structures for lithium metal anodes as well as new electrolytes, we have shown early indications that you can give this anode material a much longer cycle life and better safety.”

Batteries on the grid scale not only put a strong demand on manufacturing capability and cost, they put a high stress on global raw resources. “There may not be enough of materials such as cobalt and lithium to go around, so in my lab we look at replacements such as sodium-ion batteries,” Li says.

Li receives funding from the National Science Foundation and the Department of Energy to examine fundamental issues of battery chemistry and mechanics. But industry funding is crucial for his battery work, which is supported not just by Samsung and General Electric but Honda, Weifu, IHI, and many other firms.

His research also draws on MIT’s strengths in advancing energy and materials studies. “We have tremendously deep knowledge and tremendous resources to bring to bear on these very important problems,” he says. “MIT is the world’s biggest stage for this line of research.”