Asking the questions that unlock innovation

According to Hal Gregersen brainstorming in “question bursts” is the best way for innovative leaders and problem solvers to find solutions.

Most of us can agree on some of the qualities that define great business leaders: The best leaders are decisive, inspirational, and insightful – they’re practical, but also capable of taking the risks necessary for success. Yet, there is another trait that is shared by the world’s most innovative CEOs that do not fit easily into our common perceptions of leadership: curiosity.

“For 30 years I’ve tried to figure out how great leaders do their work exceptionally well,” says Hal Gregersen, Executive Director of the MIT Leadership Center. “I found they were all exceptional at asking better questions -- questions that are catalytic, that transform something from what is to what in a very amazing way might be.”

Asking questions has always played a role in leadership, but it’s more vital than ever in today’s fast-changing digital landscape, says Gregersen, a Senior Lecturer in Innovation and Leadership at MIT’s Sloan School of Management. Only by asking the right questions can leaders achieve innovation, which is “pivotal” to success.

For 30 years I’ve tried to figure out how great leaders do their work exceptionally well. I found they were all exceptional at asking better questions -- questions that are catalytic, that transform something from what is to what in a very amazing way might be.

His newest book, Questions Are the Answer: A Breakthrough Approach to Your Most Vexing Problems at Work and in Life, dives deep into active questioning, one of five skills highlighted in his prior best-selling book, “The Innovator’s DNA: Mastering the Five Skills of Disruptive Innovators” (co-authored with Harvard Business School’s Clayton Christensen and BYU’s Jeff Dyer). Based on research interviews with over 200 of the world’s most innovative leaders in business, technology, government, and social enterprises, Gregersen found that great questions have a catalytic quality -- that is, they dissolve barriers to creative thinking and channel the pursuit of solutions into new, accelerated pathways. Often, the moment they are voiced, they have the paradoxical effect of being utterly surprising yet instantly obvious.

The most common venue for asking questions is the business meeting. To boost questioning skills, Gregersen teaches a variation on the traditional brainstorming session called a “question burst.” Rather than proposing new ideas, participants ask questions about a challenge or opportunity. The process often produces fresh perspectives and innovative solutions. (See sidebar farther below.)

There’s only so much you can find out in a business meeting, however. Gregersen recommends that leaders should wander the halls and get out into the world to seek out new inputs and viewpoints that can inspire new questions.

“One trait that is common to the most innovative and successful leaders is that they spend about 30 percent of their work day actively exploring new ideas,” says Gregersen. “They seek out the passive data that might lead to insights that could disrupt their industry and create an entirely new path. They go out of their way to escape their isolation bubbles and place themselves in strikingly different situations with different people so they can hear the things they otherwise wouldn’t hear -- the things people want to say or ask but don’t.”

Whether you’re a CEO or the leader of a nation, isolation is one of the biggest pitfalls of being on top. “Isolation starts the moment that you get into your first leadership role, and the challenges stemming from that accelerate as you move higher,” says Gregersen. “Information is pushed at you nonstop that has already been massaged and manipulated and packaged to fit into your world view. At the top, it becomes excruciatingly difficult to uncover what you don’t know that you don’t know. That’s the point where you become disrupted and blindsided.”

When CEOs get stuck inside a bubble, “the company’s innovation is either on its way to dying or is already dead,” continues Gregersen. “A few years ago, I interviewed Walt Bettinger, the CEO of Charles Schwab, and asked him to tell me his number one challenge. ‘Isolation,’ he answered. ‘People start telling me what they think I want to hear and don’t tell me what I don’t want to hear.’”

When Gregersen interviewed Pixar/Disney’s Ed Catmull, who he praises as one of the most innovative questioners in business today, Catmull noted that isolation leads to a “dangerous disconnect” from reality. “The moment we become successful and get to the top of a successful organization, it’s so easy to be dangerously disconnected,” says Gregersen. “Most CEOs make two or three decisions during their tenure that make all the difference. The groundwork needed to make those decisions right require that you get out of your office. You need to meet people who are surprising and uncomfortable, and who make you think twice about what you’re doing.” 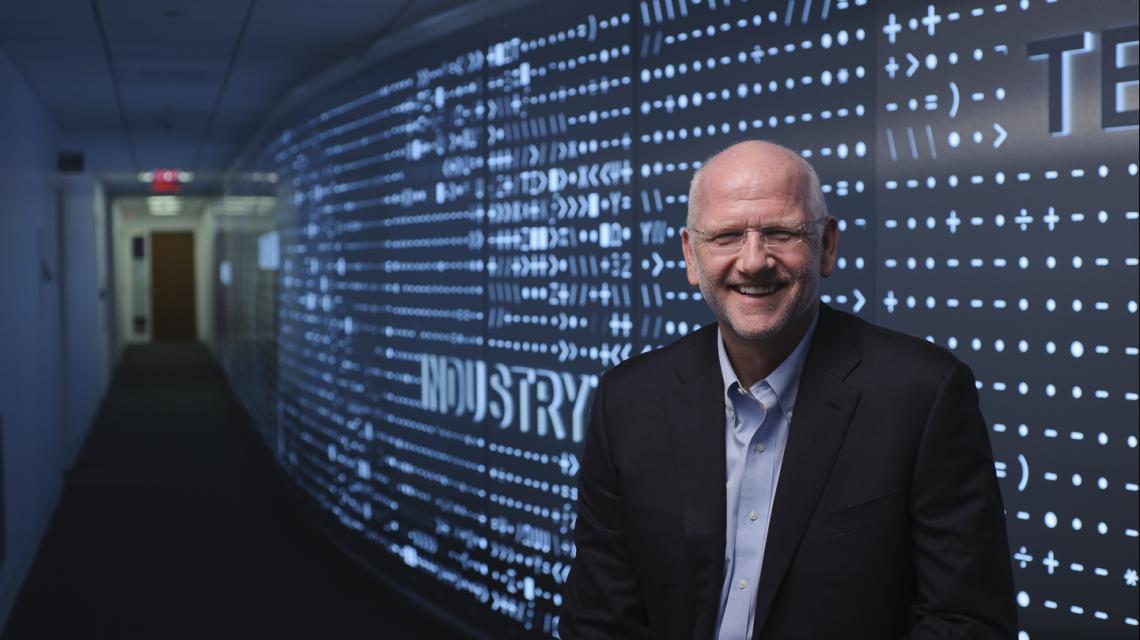 Asking questions is only valuable if you listen to the answers with an open mind, says Gregersen. “If we put ourselves into these situations, there’s a very high probability we’ll find out we’re wrong about something, which makes us uncomfortable. Leaders have to be very quiet and listen not only to the world around them but to what’s going inside. In this way, a different question can surface and open an opportunity they never would have seen before.”

When Gregersen asked Mark Benioff, founder and CEO of Salesforce.com, how he was able to ask himself the right questions, his answer was “Listen.” Years ago, when Benioff was exploring ways to sell enterprise software to small and medium-sized companies, he took a year’s sabbatical and traveled the world.

“Benioff put himself in strikingly different places and asked questions of thousands of people, leaders and non-leaders, rich and poor, business and government, profit and nonprofit,” says Gregersen. “Then one day while swimming in the Pacific he came up with the idea: selling enterprise software the way Amazon sells books. Today it sounds like duh, of course, but back then it was duh, you’re an idiot. The idea launched an entire new industry.”

Benioff never forgot how he came up with his big idea. “Listening is a deep core element of Salesforce’s culture, and part of their ability to continually innovate,” says Gregersen.

Asking and listening skills are essential to innovation, but leaders also need to “observe, network, and experiment,” says Gregersen. These skills help “create a situation where you can ‘connect the unconnected,’ as Steve Jobs said, or engage in Einstein’s ‘combinatory play.’ In the Innovator’s DNA, we call it associative thinking.”

Most CEOs make two or three decisions during their tenure that make all the difference. The groundwork needed to make those decisions right require that you get out of your office. You need to meet people who are surprising and uncomfortable, and who make you think twice about what you’re doing.

Although few of us possess all these skills at the highest level, it’s important for leaders to excel in at least one. Intuit’s Scott Cook, for example, is a born observer. “He's always looking around the world to figure out what's surprising,” says Gregersen. Amazon’s Jeff Bezos, on the other hand, is a natural experimenter, a skill honed as a youth while spending summers on his grandfather’s farm in Texas. “His grandfather bought a broken-down tractor and challenged him to fix it,” relates Gregersen. “Jeff learned at an early age he had to keep trying.”

One traditional skill associated with strong leadership remains crucial: decisiveness. After all the asking and listening, you need to know when you’ve come up with the right idea, and then act upon it. You also need to give it a chance to prosper.

“Too many executives lack strong compositions or deep clarity about what they’re trying to accomplish,” says Gregersen. “They don’t frame a situation powerfully enough that they’re unwilling to wait and trust that other people are going to play their roles. There are so many leaders who are good at the flavor of the month. They can compose, but do not wait because they were never fully committed.”

The capability to explore, ask questions, think creatively, and soak up knowledge, tends to fade with age, which is a dilemma for industries that require constant innovation. Yet, the loss of creativity and an open mind may derive less from biological processes than from the cumulative weight of conformity.

“Losing the ability to ask better questions is partially due to age, but it also comes from working for decades in organizations that don’t value asking better questions,” says Gregersen. “You can get crushed.”

The good news for the gray-haired set is that many of the most innovative leaders running companies today are over 60, or even 70, including Catmull and others. “One of the most provocative innovators I’ve interviewed is 79-year old Stewart Brand,” says Gregersen, referring to the legendary writer and founder of The Well and the Whole Earth Catalog.

“For decades, Brand has been one of the cutting-edge innovators in Silicon Valley, and he’s still one of the brightest, most inquisitive minds around,” continues Gregersen. “I asked him how he formulated the better question, and he told me ‘Every day I wonder how many things I am dead wrong about.’ He’s always trying to surface surprises. Whether you’re young or old, the trap is believing that what you do is the only way to do it.”

The best way to avoid that trap is to create a corporate culture where leaders aren’t isolated, where questions are encouraged, and where employees aren’t beaten down for trying something different. “Organizations with strong innovation have a strong foundational layer of trust in their systems that allow people to stand up and be truth-seekers,” says Gregersen. “If we don’t ask the uncomfortable questions of our senior leaders, and systematically seek out surprises, they will seek us out first.”

To build skills in active questioning, Gregersen encourages business leaders do try a twist on brainstorming he calls a “question burst.” First, you define a central challenge or opportunity faced by the organization, and then ask everyone in the group to write down how they feel about it. Then, instead of trying to quickly generate new ideas about the challenge, you take turns asking questions about it during a defined period, usually four minutes.

There are two rules to the question burst: No one is allowed to give answers or explain why they’re asking the question. “This way you’re not restraining the way other people see the problem or opportunity,” explains Gregersen.

At the end of the session, ask everyone to do another quick emotional check to see if they feel any different, and then jointly examine the questions and decide which ones deserve more research. Finally, the group should examine whether the process has helped reframe the challenge or generate new ideas.

After recording the results of question bursts with thousands of leaders over the years, Gregersen has found that at least 80 percent of time the challenge is slightly reframed in a better way, and at least one valuable new idea is generated. Not only does the process generate more ideas than simply proposing solutions, it also produces motivational benefits.

“Afterward people feel better about the problem or opportunity at least 80 percent of the time,” says Gregersen. “Research shows that if we’re in a more emotionally positive state, there’s a higher probability that we’re going to get a new idea that is valuable.”

Hal Gregersen's new book, Questions Are the Answer: A Breakthrough Approach to Your Most Vexing Problems at Work and in Life, will be published later this year by HarperCollins and is also available for pre-order on Amazon.