Pathways towards a sustainable future

Pathways towards a sustainable future
resources

As Director of MIT’s Environmental Solutions Initiative and the Principal Investigator of the Urban Metabolism Group, John Fernandez takes a multidisciplinary approach to solving the environmental and ecological challenges of our time.

“Typical good definitions of innovation almost always include a new idea that serves a niche in the marketplace,” says John Fernandez. “I like to expand on that—especially regarding ideas coming out of MIT—to say that innovation entails new ideas that can bridge the gap between academia and industry while serving the marketplace and society as a whole.” While Fernandez has held a number of roles at the Institute, including Director of the Building and Technology Program and Co-director of the Urban Design Center, his attention is currently focused on his work as Director of the Environmental Solutions Initiative (ESI) and as Principal Investigator of the Urban Metabolism Group.

Fernandez is an expert on high-performance building materials and a practicing architect whose design work accounts for more than 2.5 million square feet of construction in cities around the world. He holds a BS in Architecture from MIT and completed his graduate work at Princeton’s School of Architecture. “One of the earliest thoughts I had as a designer was that the decisions we make in choosing materials for a building, from the structure to the finishes, have enormous consequences globally,” he says.

Fernandez explored this train of thought during his years as a young architect and as a researcher at MIT, diving deeply into the field of industrial ecology in an effort to better understand the resource requirements of our industrial processes. In 2008, Fernandez founded the Urban Metabolism Group with the idea that society and the planet as a whole would benefit from the application of greater precision and scientific rigor to our understanding of the resource requirements of our cities for a sustainable future.

As conceived by Fernandez, the Urban Metabolism Group is highly multidisciplinary in nature and leverages the full capacity of MIT to define technology pathways for a more humane and sustainable future. “Working in cities requires a huge range of expertise, from the basic sciences to mathematics, engineering, and policymaking,” says Fernandez. “Because cities are really where all these things are happening. They’re sites of knowledge creation and they’re also testbeds for the future.”

Working in cities requires a huge range of expertise, from the basic sciences to mathematics, engineering, and policymaking, because cities are really where all these things are happening. They’re sites of knowledge creation and they’re also testbeds for the future.

Today, 55 percent of the world’s population lives in cities, with that number projected to reach nearly 70 percent by 2050. This increase in urbanization will undoubtedly have a dramatic impact not only on society and on culture but also on the global economy. “In the 21st century, cities are going to determine the course of our species,” says Fernandez. “It is essential for us to better understand the consequences of increased urbanization, both in terms of society and our needs, but also in terms of the natural capital and ecology of the planet,” says Fernandez.

As Director of MIT’s Environmental Solutions Initiative (ESI), Fernandez is charged with mobilizing the MIT community to accelerate solutions to the world’s environmental challenges. This means bringing to bear the Institute’s significant scientific, engineering, policy, and design capabilities. ESI’s diverse range of work to drive progress towards environmental solutions is structured around three key domains: climate science and earth systems, cities and infrastructure, and sustainable consumption and production. ESI approaches efforts in these areas through activities that include research, education, and convening.

With Fernandez as Director, ESI has funded a wide variety of projects led by experts across areas and disciplines. ESI Seed Grants have supported studies on the use of machine learning and data-driven approaches to improve climate science, the sustainability of autonomous transportation systems, and the beneficial use of industrial wastes. The initiative recently awarded funding to MIT professor of mechanical engineering Thomas Peacock to support his efforts to understand the ecological consequences of deep-seabed mining. Mining the seabed for minerals like cobalt, manganese, and nickel might ease the resource strain imposed by a growing population and increased urbanization, but the environmental impacts could be far reaching. 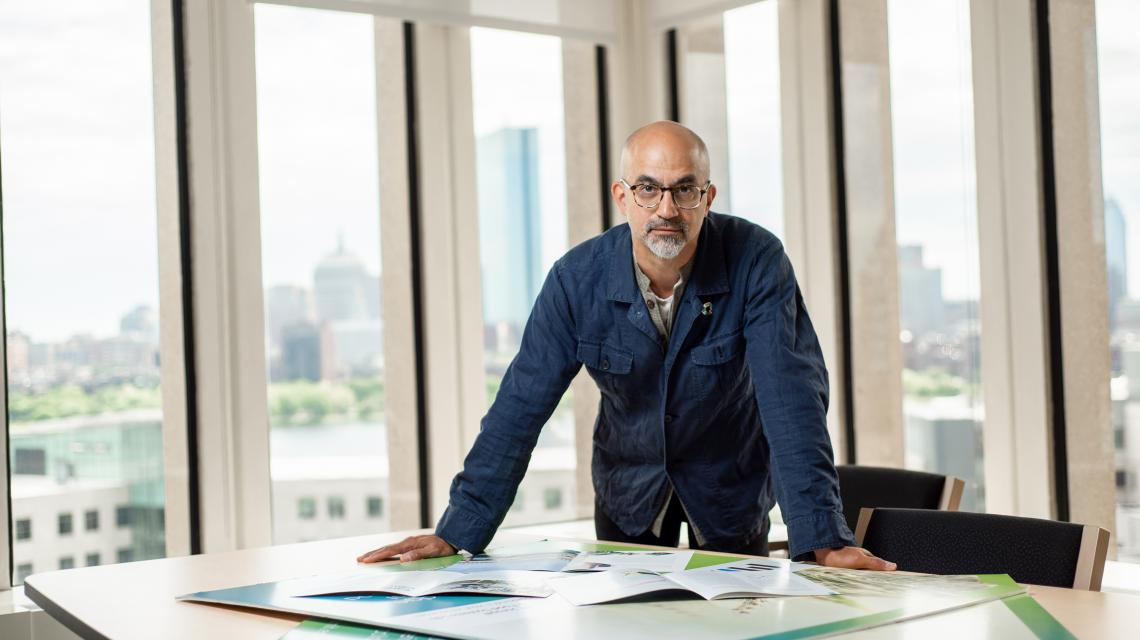 Throughout his time at MIT, Fernandez has worked closely with government and industry to affect policy change and implement technological innovations to address societal challenges. With more companies asking tough questions about how to position themselves to serve society, Fernandez believes the Institute has an essential role to play in finding an answer. “At MIT, there’s an extraordinary capacity for advising and guiding cities towards a sustainable future,” says Fernandez. “The MIT presence often changes the landscape; it changes not only the discourse that’s ongoing, but also brings in a number of different perspectives that wouldn’t have been there otherwise. We act as a very powerful convener.”

Often, that convening role involves partnering with industry working in tandem with government. “My work with large companies has been extraordinarily helpful because companies are really the change makers,” he says. He notes the recent proliferation of energy-efficient materials and devices now available to architects, and credits the ties between academia and industry as playing a key role in that shift. “In part, the marketplace has responded because researchers and academics have been connected very directly to industry.”

The MIT presence often changes the landscape; it changes not only the discourse that’s ongoing, but also brings in a number of different perspectives that wouldn’t have been there otherwise. We act as a very powerful convener.

Fernandez is currently engaged in work with the Mayor’s offices of New York City and Hong Kong to explore the consequences of climate change, specifically how to prepare city infrastructure, water systems and power systems, as well as the buildings themselves for future extreme weather events. “We’re looking at how to protect large buildings from extreme storms that are just going to get more powerful in the future,” he says. These efforts include developing sky scrapers capable of handling the increased strength of winds that are one of the many results of climate change projected to affect our cities.

His research helps to better understand not only current resource requirements but also past resource requirements, how cities reached this state of consumption, and how that will change in the future. “Future challenges are going to be in the developing world,” says Fernandez. “There is going to be an enormous need to transition the sustainability pathways and sustainability strategies from the developed to the developing world, and to build cities so that they are really looking towards the future and not building as we have in the past.” 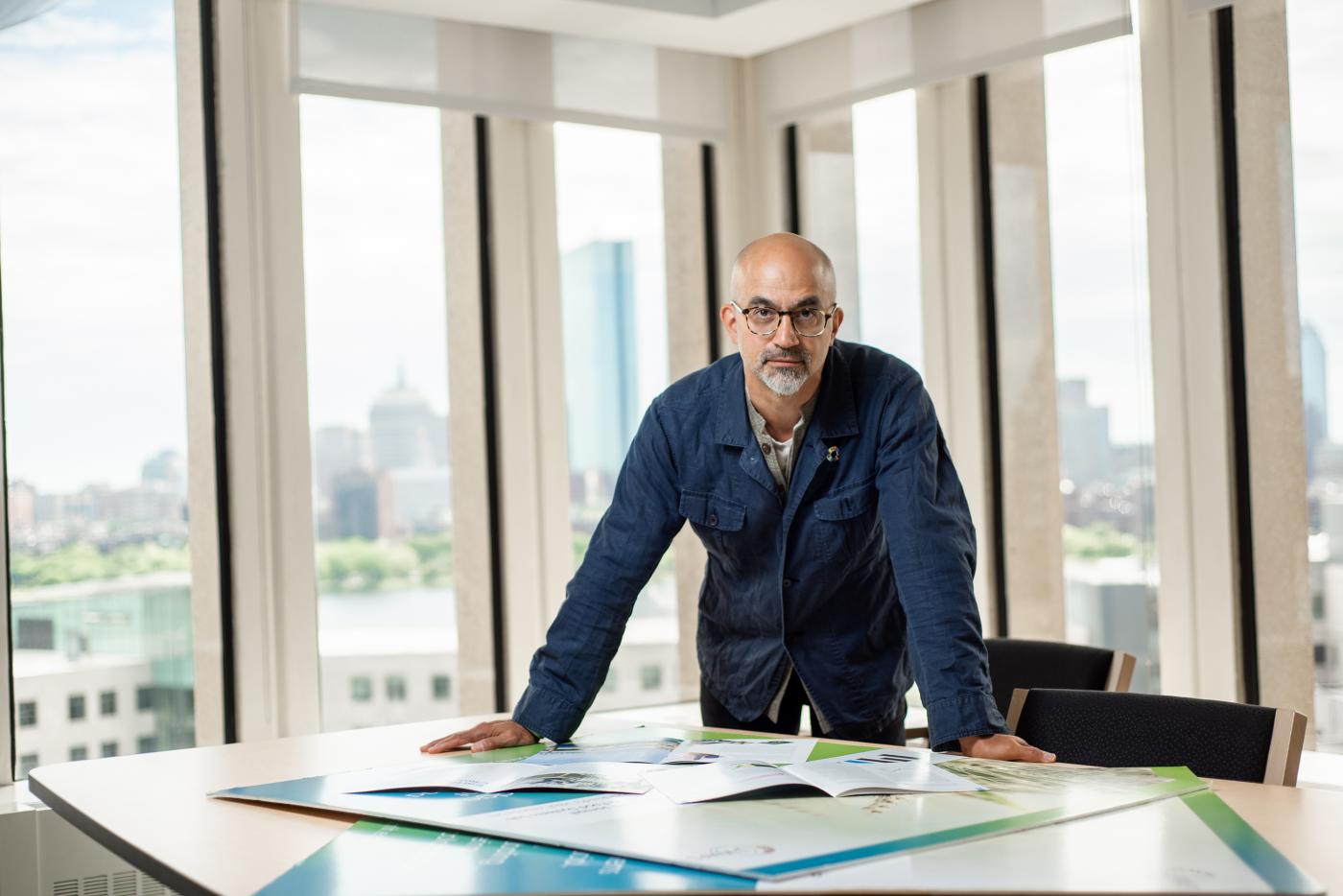