Maker culture gets a boost at Project Manus

Maker culture gets a boost at Project Manus
makers

MIT’s first “Maker Czar” Martin Culpepper started making and breaking things from an early age. “I was taking stuff apart at the house from the age of four,” says Culpepper, a professor of mechanical engineering. “In high school and college, I basically lived in machine shops. I always smelled like machine oil.” At Iowa State and then MIT, Culpepper learned “how difficult it was not only to fabricate things but to make a million of them. This led me to design research and then manufacturing research.”

More specifically, it led Culpeper to his current position as Director of MIT’s Precision Compliant Systems Laboratory. The lab pursues research into mechanism-based machines, components, and fixturing from the nano to the macroscale for manufacturing, metrology, manipulation, and robotics.

Culpepper’s expertise in manufacturing combined with his social skills and enthusiasm for collaborative projects made him the ideal candidate to be MIT’s first Maker Czar. In this role, Culpepper directs MIT’s five-year old Project Manus, which sets up new makerspaces, improves facilities and safety training procedures, and ensures that students have access to the latest technologies. The project oversees over 800 pieces of high-tech equipment spread around 45 major labs and maker sites spanning 130,000 square feet.

“It’s in our DNA here to make and build things,” says Culpepper.  “Makerspaces are some of the key resources at MIT. They’re the best way students have to get their hands dirty, to make mistakes and build confidence.”

Makerspaces are some of the key resources at MIT. They’re the best way students have to get their hands dirty, to make mistakes and build confidence.

Project Manus is currently launching the mother of all MIT makerspaces: the 16,000+ square foot Metropolitan Warehouse Maker Space. Other projects include a Mobius app to help students find makerspaces and equipment, a biannual MakerBreak hackathon event, and a Make Impact Consortium that brings together industry and academia to encourage maker-driven entrepreneurship. Project Manus has established student-run programs including a MakerLodge course for first year students and a free-form makerspace called The Deep.

Makerspaces can range from laboratories to more informal hardware hacking spaces. “They are typically defined by having a group of people who take care of the space and the students,” says Culpepper. “You can use a makerspace to do research, work on your classwork or senior projects or do personal projects. We have students who use our spaces to fix their bikes, learn glass blowing or cooking, or make gifts for their friends’ weddings. At the other extreme, people using our spaces for fabricating giant fixturing and placement elements for scanning electron microscopes and satellite parts.”

Mobius app pinpoints the makerspace for you

Finding the right tool for the job is easier thanks to the Mobius mobile app. “In developing Mobius, we did a survey across campus and found that people often kept the best makerspaces secret so they wouldn’t get crowded,” says Culpepper “Finding a good makerspace is kind of like finding a good fishing hole.”

With Mobius, all the good fishing spots are easily discoverable. “You can search for a particular type of 3D printer or other equipment, and the app will show you where they are, how to get there, and who to contact to get trained,” says Culpepper. 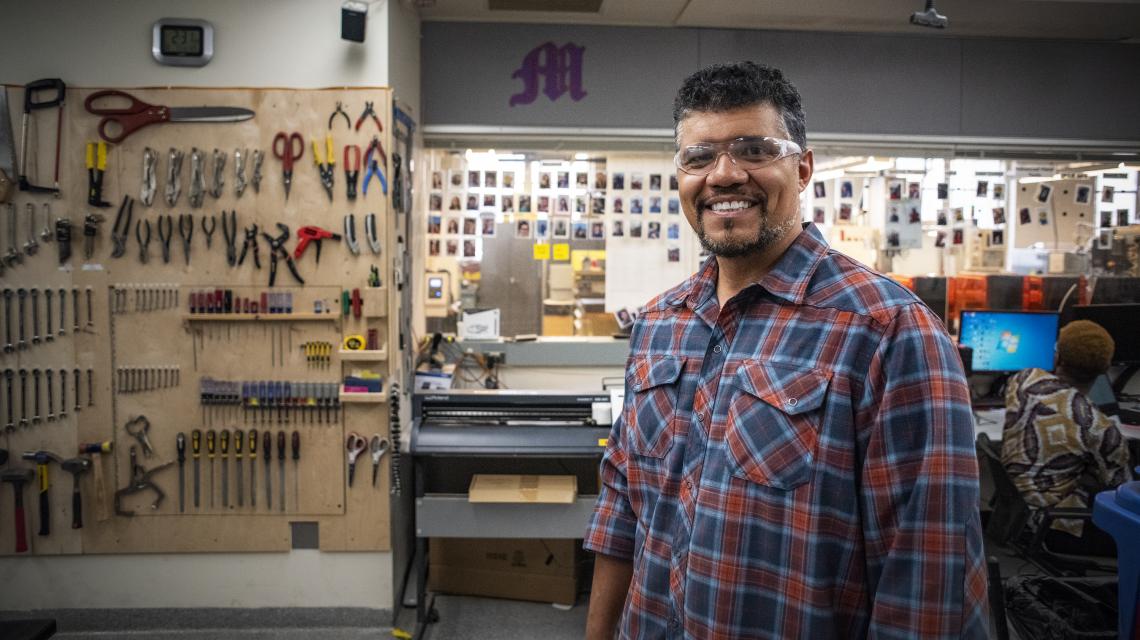 With greater access to machinery comes an increased need for safety training, which Culpepper defines as one of his group’s primary tasks. Yet “there are no machines on campus that are as hazardous as a driving a pickup truck at 65 mph,” adds Culpepper. “We have the same approach as teaching a 16-year old to drive: You need to be trained and there need to be consequences if you do something wrong. There are some pieces of equipment that we only let staff people use, but we try to open student access to as much equipment as possible. If you’re going to learn, you have to get your hands dirty.”

Since DIY is an essential part of the maker ethos, Project Manus has endeavored to involve students, including undergrads, in running maker spaces and events. “Students often prefer to learn from other students,” says Culpepper.

Student-hosted events include a Pumpkins and Power Tools Halloween party and an annual Make or Break event that brings in up to 1,000 students for free-form making. The events provide a “pressure release” from academic work and “a way to meet new people,” says Culpepper. “We’re trying to build a community of makers.”

Since DIY is an essential part of the maker ethos, Project Manus has endeavored to involve students, including undergrads, in running maker spaces and events.

A new facility for multi-disciplinary making called The Deep is run primarily by students, partly due to practical concerns. “With The Deep we’re trying to cover a broader range of hours,” explains Culpepper. “The techs run the place during daytime class hours and the students take charge in the evening, so the equipment is accessible 12 hours or more each day.”

The open-ended, interdisciplinary environment at The Deep is being expanded on a massive scale at the multi-purpose Metropolitan Warehouse Maker Space. Due to begin opening later this year, with full occupancy in 2022, the space will serve as a “one-stop shop” for anyone’s maker needs, says Culpepper. One goal is to “expose early undergrads to many technologies as possible before they specialize.”

Culpepper is using The Deep and other maker facilities to determine maker best practices. For example, Project Manus is experimenting with loaning out certain equipment from makerspaces such as 3D printers for students to take back to their dorm rooms. The group is also in the process of supporting MIT’s effort to outfit MIT dorms with their own makerspace.

“We’re always looking for better ways to provide access, staff, and train students,” says Culpepper. “We’re preparing to spend about $15 million to build the Metropolitan space and we need to get the best bang for the buck.”

A recent program called the Make Impact Consortium expands upon this future-looking approach to envision the type of maker skills industry will need in 10 to 20 years. Make Impact has a mission to “integrate the skillsets of making and entrepreneurship,” says Culpepper.

Culpepper co-launched the consortium with Professor Bill Aulet, director of the Sloan School’s Martin Trust Center. They spent several years researching maker culture at MIT and at universities and companies around the globe to discover best practices and “pockets of excellence.” In the process, the Make Impact Consortium has grown into a global partnership of academic and industry partners attempting to “figure out the best ways to educate students in entrepreneurship, innovation and making,” says Culpepper.

The Make Impact Consortium is working with industry to see what skillsets they need to create “intrapreneurs inside the company whose job is to come up with new ideas,” says Culpepper. “Then we can figure out how to put our resources together to give students the skills that industry wants.”

Make Impact ties into Project Manus’ overall mission to connect students with the right tools. “We want to provide the resources for students so they have the opportunity to realize the ideas they have in their heads,” says Culpepper. 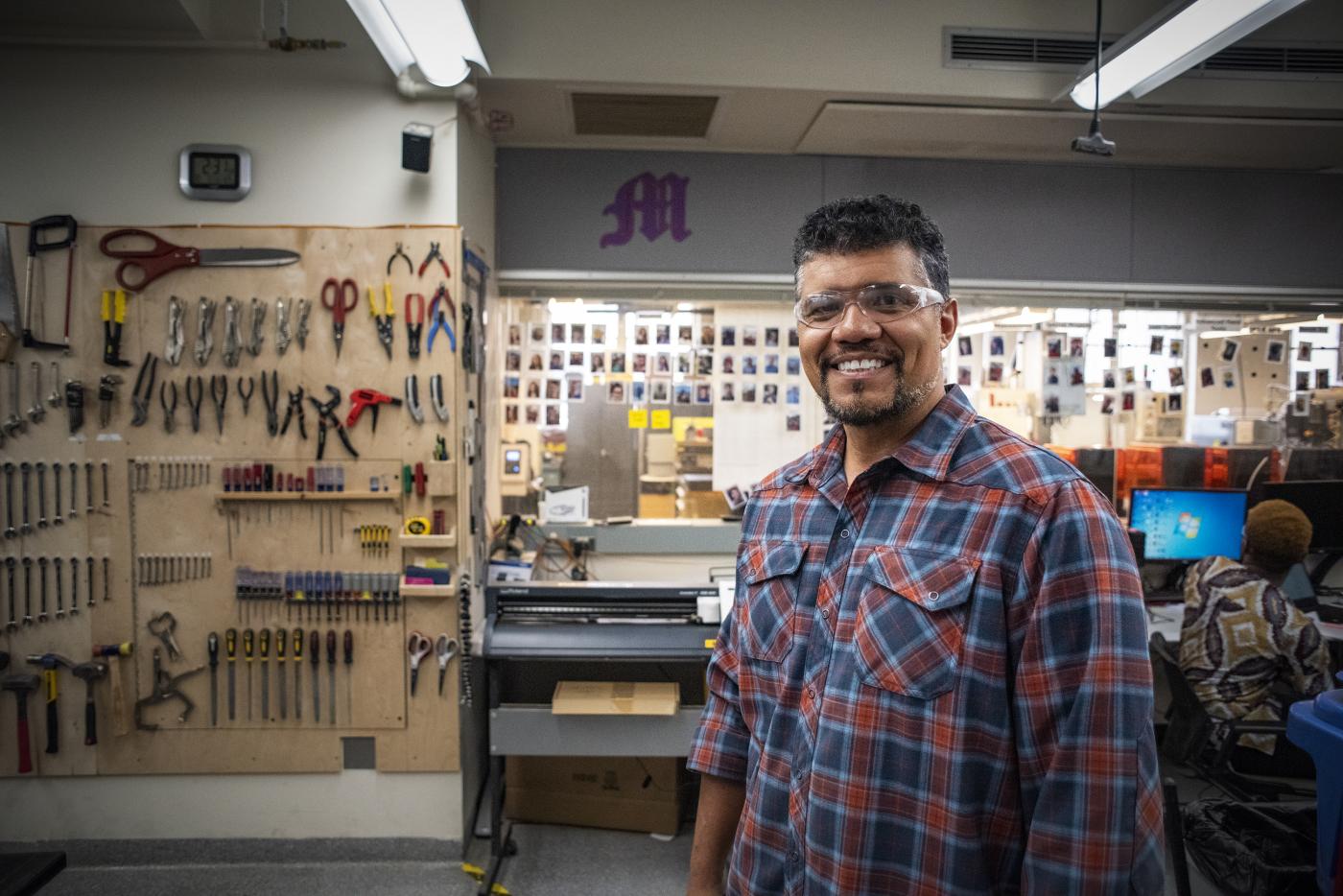